A program does nothing unless its instructions are executed by a CPU. A program in execution, as mentioned, is a process. A time-shared user program such as a compiler is a process. A word-processing program being run by an individual user on a PC is a process. A system task, such as sending output to a printer, can also be a process (or at least part of one). For now, you can consider a process to be a job or a time-shared program, but later you will learn that the concept is more general. It is possible to provide system calls that allow processes to create subprocesses to execute concurrently.

A process needs certain resources—including CPU time, memory, files, and I/O devices—to accomplish its task. These resources are either given to the process when it is created or allocated to it while it is running. In addition to the various physical and logical resources that a process obtains when it is created, various initialization data (input) may be passed along. For example, consider a process whose function is to display the status of a file on the screen of a terminal. The process will be given the name of the file as an input and will execute the appropriate instructions and system calls to obtain and display the desired information on the terminal. When the process terminates, the operating system will reclaim any reusable resources. We emphasize that a program by itself is not a process. A program is a passive entity, like the contents of a file stored on a disk, whereas a process is an active entity. A single-threaded process has one program counter specifying the next instruction to execute.

The execution of such a process must be sequential. The CPU executes one instruction of the process after another until the process completes. Further, at any time, one instruction at most is executed on behalf of the process. Thus, although two processes may be associated with the same program, they have nevertheless considered two separate execution sequences. A multithreaded process has multiple program counters, each pointing to the next instruction to execute for a given thread.

The operating system is responsible for the following activities in connection with process management: • Scheduling processes and threads on the CPUs

• Creating and deleting both user and system processes

A thread is a basic unit of CPU utilization; it comprises a thread ID, a program counter, a register set, and a stack. It shares with other threads belonging to the same process its code section, data section, and other operating-system resources, such as open files and signals. A traditional (or heavyweight) process has a single thread of control. If a process has multiple threads of control, it can perform more than one task at a time. Figure 4.1 illustrates the difference between a traditional single-threaded process and a multithreaded process. 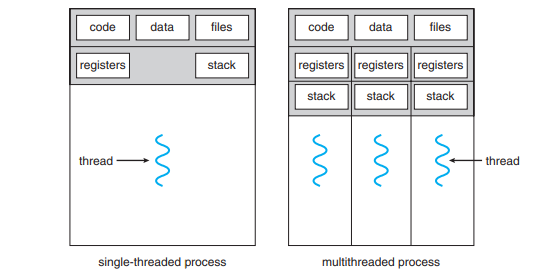 Most software applications that run on modern computers are multithreaded. An application typically is implemented as a separate process with several threads of control. A web browser might have one thread display images or text while another thread retrieves data from the network, for example. A word processor may have a thread for displaying graphics, another thread for responding to keystrokes from the user, and a third thread for performing spelling and grammar checking in the background. Applications can also be designed to leverage processing capabilities on multicore systems. Such applications can perform several CPU-intensive tasks in parallel across multiple computing cores.

In certain situations, a single application may be required to perform several similar tasks. For example, a web server accepts client requests for web pages, images, sound, and so forth. A busy web server may have several (perhaps thousands of) clients concurrently accessing it. If the webserver ran as a traditional single-threaded process, it would be able to service only one client at a time, and a client might have to wait a very long time for its request to be serviced.

One solution is to have the server run as a single process that accepts requests. When the server receives a request, it creates a separate process to service that request. In fact, this process-creation method was in common use before threads became popular. Process creation is time-consuming and resource-intensive, however. If the new process will perform the same tasks as the existing process, why incur all that overhead? It is generally more efficient to use one process that contains multiple threads. If the web-server process is multithreaded, the server will create a separate thread that listens for client requests. When a request is made, rather than creating another process, the server creates a new thread to service the request and resume listening for additional requests.

Finally, most operating-system kernels are now multithreaded. Several threads operate in the kernel, and each thread performs a specific task, such as managing devices, managing memory, or interrupt handling. For example, Solaris has a set of threads in the kernel specifically for interrupt handling; Linux uses a kernel thread for managing the amount of free memory in the system.

When we run a thread in java, it is called a task. If a printer prints a document, it is said to perform a printing task. When the computer computes the addition of two numbers entered by the user, it is also a task (addition task). More than one task can be performed together at the same time and it is known as multitasking. When more than one task is performed in parallel at the same time, then it is known as parallel tasking. Multitasking is also known as time-sharing. Multitasking is an extension of a multiprogramming Operating System.

A process is an instance of a computer program that is being executed. It contains the program code and its current activity. Depending on the operating system (OS), a process may be made up of multiple threads of execution that execute instructions concurrently. Process-based multitasking enables you to run the Java compiler at the same time that you are using a text editor. In employing multiple processes with a single CPU, context switching between various memory context is used. Each process has a complete set of its own variables.

A thread of execution results from a fork of a computer program into two or more concurrently running tasks. The implementation of threads and processes differs from one operating system to another, but in most cases, a thread is contained inside a process. Multiple threads can exist within the same process and share resources such as memory, while different processes do not share these resources. Example of threads in same process is automatic spell check and automatic saving of a file while writing. Threads are basically processes that run in the same memory context. Threads may share the same data while execution.

A task is a set of program instructions that are loaded in memory.  The states of a task are as shown in the figure below. The states are idle state, ready state, running state and blocked state. The idle state is the state of the task when it is just created. Once it is attached to the kernel, it enters into ready state, i.e. it has all the resources required for its execution. In the multi-tasking system, the OS schedules the task by either giving it a signal or a message, that causes the task to enter into the running state. In case if there is unavailability of a resource or the task has to wait for a signal or message, the task enters into the blocked state. If the task is in blocked state for long time, it enters into idle state. In case if the task gets the signal or message for which the task was waiting then the task enters again into running state from the blocked state.