Data acquisition (DAQ) is the process of measuring an electrical or physical phenomenon such as voltage, current, temperature, pressure, or sound with a computer. A DAQ system consists of sensors, DAQ measurement hardware, and a computer with programmable software. 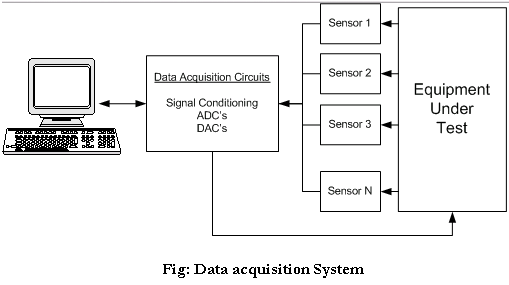 A Data Acquisition System is comprised of three parts; an I/O sub-system, a host computer and the controlling software. However, some systems, such as the PowerDNA Cube running a standalone Linux application combine the I/O sub-system and the host CPU in the same package. These systems are often referred to as embedded DAQ systems. Standard systems with a separate host computer and I/O system require a method to communicate with each other. The most common Data Acquisition System interfaces are the PCI bus, PXI bus, Ethernet, USB and Serial I/O. However there are systems based on many other architectures including GPIB, CAN bus, Firewire (IEEE-1394), PCI Express as well as many legacy bus architectures including VME, MultiBus, ISA bus, NU Bus and many more.

Most data acquisition systems can be categorized as either an “external box” or internal plug-in board configuration. As the names imply, Ethernet and USB are external systems, while PCI and PCI Express are considered internal systems. The choice of which system is better for a particular application has long been a bone of contention and competition among the various DAQ vendors in the marketplace. Of course some vendors, including UEI have decided that both have advantages and support both external and plug-in board solutions. One of the major advantages of an external box approach is the actual measurement system can often be located closer to the sensors and

actuators with which it interfaces. This minimizes the length of wires required to connect the I/O to the data acquisition system which in turn reduces the noise picked up in the field wiring. Locating the I/O system close to actual measurement also frequently greatly reduces the time and expense for connecting the field wiring.