TOTAL MARKS: 80
TOTAL TIME: 3 HOURS (1) Question 1 is compulsory.
(2) Attempt any three from the remaining questions.
(3) Assume data if required.
(4) Figures to the right indicate full marks. 1 (a) Three concurrent forces P=150N, Q=250N and S=300N are acting at 120° with each other. Determine their resultant force magnitude and direction with respect to P. What is their equilibrant?(4 marks) 1 (b) A prismatic bar AB of length 6m and weight 3KN is hinged to a wall and supported by cable BC. Find hinge reaction and tension in cable BC. 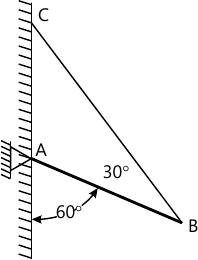 (4 marks) 1 (c) A block of weight 800N is acted upon by a horizontal force P as shown in figure. If the coefficient of friction between the block and incline are μs=0.35 and μk=0.25, detemine the value of P for impending motion up the plane.

(4 marks) 1 (d) A bolt air balloon starts rising vertically up from the ground with an acceleration of 0.2 m/s2. 12 seconds later the man sitting inside the balloon releases a stone. Find the time taken by the stone to hit the ground.(4 marks) 1 (e) A small block rests on a turn table, 0.5m away from its centre. The turn table, starting from rest, is rotated in such a way that the block undergoes a constant tangential acceleration. Determine the angular velocity of the turn table at the instant when the block start slipping. μ=0.4.(4 marks) 2 (a) Three right circular cylinder A, B, C are piled up in a rectangular channel as shown in figure. Determine the reactions at point 6 between the cylinder A and vertical wall of the channel.
(Cylinder A: radius=4cm, mass=15kg)
Cylinder B: radius=6cm, mass=40kg, Cylinder C: radius=5cm, mass=20kg. 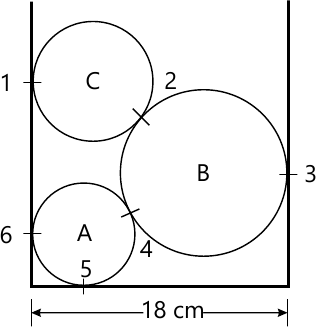 (8 marks) 2 (b) Four forces and a couple are acting on a plate as shown in figure. Determine the resultant force and locate it with respect to point A. 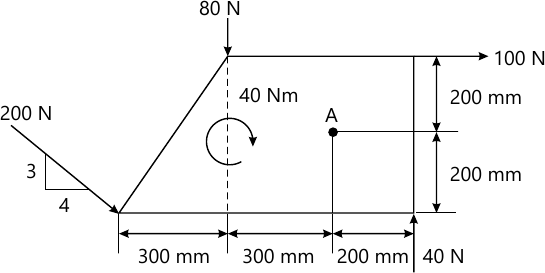 (6 marks) 2 (c) Two balls with masses 20kg and 30 kg are moving towards each other with velocities 10 m/s and 5m/s respectively. If after impact the ball having mass 30kg reverses its direction of motion and moves with velocity 6m/s, then determine the coefficient of restitution between the two balls.(6 marks) 3 (a) Determine the Centroid of the shaded area. All dimensions are in mm. 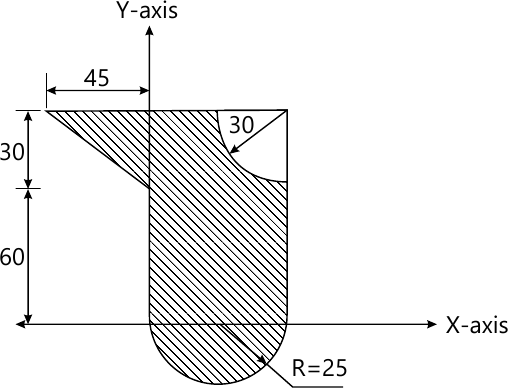 (6 marks) 4 (a) Find support reactions at A and B for the beam loaded as shown m figure. A is hinged and B is roller.

(8 marks) 4 (b) An object is projected so that it just clears two obstacles each of 7.5m height, which are situated 50 m from each other. If the time of passing between the obstacles is 2.5 s, calculate the complete range of projection and the initial velocity of the proctile.

(6 marks) 4 (c) The crank BC of a slider crank mechanism is rotating at constant speed of 30 rpm clockwise. Determine the velocity of the piston A at the given instant. 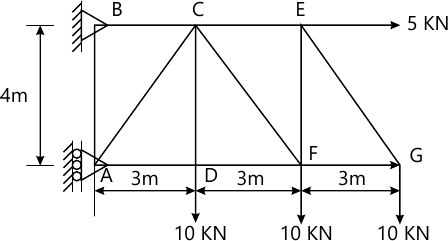 (8 marks) 5 (b) A particle moves in straight line with acceleration time diagram shown in figure. Construct velocity-time diagram for the motion assuming that the motion starts with initial velocity of 5m/s from the starting point. Also determine its displacement at t=12 seconds.

(6 marks) 5 (c) Due to slipping, points A and B on the rim of the disk have the velocity Va=1.5 m/s to the right and Vb=3m/s to the left as shown in figure. Determine the velocities of the centre point C and point D on the rim at this instant. Take radius of disk 0.24 m. 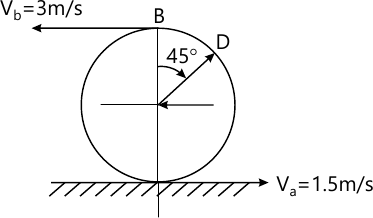 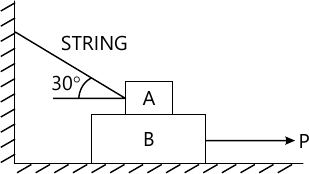 (8 marks) 6 (b) A force acts at the origin in a direction defined by the angles θy=65° and θz=407deg; Knowing that that the x-component of the force is -750N, determine
i) the other components
ii) magnitude of the force
iii) the value of θx.(4 marks) 6 (c) A particle travels on a circular path, whose distance travelled is defined by S=(0.5t3+3t)m. If the total acceleration is 10 m/s2, at t=2 sec, find its radius of curvature.(4 marks) 6 (d) Block A and B of mass 6kg and 12kg respectively are connected by a string passing over a smooth pulley. Neglect mass of pulley. If coefficient of kinetic friction between the block A and the inclined surface is 0.2, determine the acceleration of block A and block B. 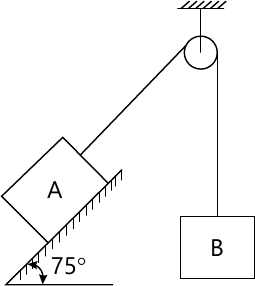