Ductile materials undergo a large amount of deformation before failing. The following figure shows the stress-strain curve for a ductile specimen: 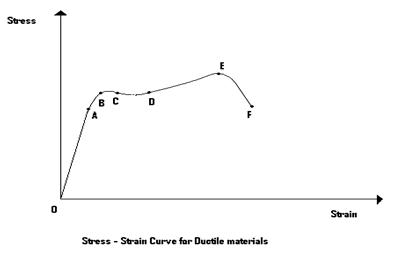 The significance for the points on the graph are given below:

Elastic Limit: This limit is represented by point B on the graph. Upto this limit, the material is said to be elastic. This implies that the specimen regains its original shape and dimensions after the removal of the external load. There are no residual deformations seen in the specimen, on removal of the load. After this point, the material is said to become plastic.

Yield Point: Contrary to what the name suggests, this is a region rather than a point. It is limited by the upper yield point ‘C’ and the lower yield point ‘D’. The stress – strain curve in this part of the graph is almost horizontal, which implies that there is an appreciable increase in strain for a negligible increase in stress. Yielding starts at ‘C’ and ends at ‘D’. After the point ‘D’, the material, due to strain hardening again starts taking load and the curve rises, as seen in the figure. The material now is said to be plastic and the deformation is of nearly permanent nature.

Ultimate Stress: This is shown by the point ‘E’ on the graph. It represents the maximum stress that a material can take before it fails. The specimen however does not fail at this point. After this point, the curve starts dropping.

Breaking Point: This is the point at which the specimen fails. After the ultimate stress point, necking of the specimen takes place, which causes a loss in the load carrying capacity of the specimen and ultimately causes it to fail. This point is represented on the curve, by point ‘F’.