Steps to convert a Moore machine to a Mealy machine:

For a state qi determine the number of outputs that are available in θ state table of the Mealy machine.

Rearrange the states and outputs in the format of Moore machine. The common output of the new state table can be determined by examining the outputs under the next state columns of the Mealy machine.

If the output in the constructed state table corresponding to the initial state is 1, then this specifies the acceptance of the null string ^ by Mealy machine. Hence, to make both the Mealy and Moore machines equivalent, we either need to ignore the corresponding to null string or we need to insert a new initial state at beginning whose output is 0; the other row elements in this case would remain the same.

The Moore machine for the problem is given as 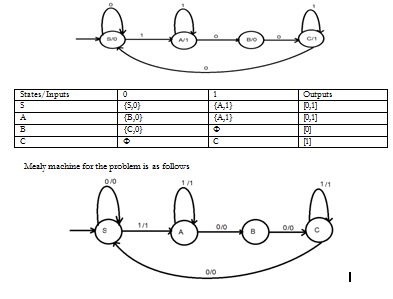