If L and M are regular languages, so is L UM.

Proof : Let L and M be the languages of regular expressions R and S, respectively.

2. Closure under Concatenation and Kleene Closure

The same idea can be applied using Kleeneclosure :

RS is a regular expression whose language is LM.

R* is a regular expression whose language is L*.

If L and M are regular languages, so is L ∩ M

Proof : Let A and B be two DFA’s whose regular languages are L and M respectively. 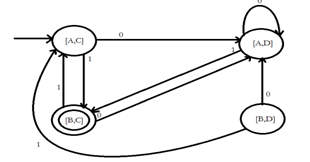 If L and M area regular languages, so is L-M, which means all the strings that are in L , but not in M. Proof : Let A and B be two DFA’s whose regular languages are L and M respectively. Now, construct C, the product automation of A and B. Make the final states of C be the pairs consisting of final states of A, but not of B. The DFA’s A-B and C-D remain unchanged, but the final DFA varies as follows: 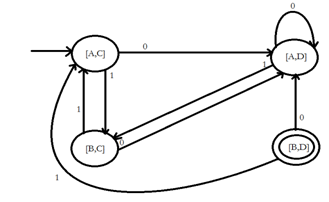 The complementof a language L (with respect to an alphabet Σ such that Σ* contains L) isΣ* – L Since Σ* is surely regular, the complement of a regular language is always regular

Given language L, LR is the set of strings whose reversal is in L

Induction: If E is

A homomorphism on an alphabet is a function that gives a string for each symbol in that alphabet.

Proof: Let E be a regular expression for L.

Apply h to each symbol in E.

Language of resulting RE is h(L)

ε is the identity under concatenation.