IEEE 802.11 is a set of media access control (MAC) and physical layer (PHY) specifications for implementing wireless local area network(WLAN) computer communication in the 900 MHz and 2.4, 3.6, 5, and 60 GHz frequency bands

The IEEE developed an international standard for WLANs. The 802.11 standard focuses on the bottom two layers of the OSI model, the physical layer (PHY) and data link layer (DLL).

The objective of the IEEE 802.11 standard was to define a medium access control (MAC) sublayer, MAC management protocols and services, and three PHYs for wireless connectivity of fixed, portable, and moving devices within a local area.

The architecture of the IEEE 802.11 WLAN is designed to support a network where most decision making is distributed to mobile stations. This type of architecture has several advantages. It is tolerant of faults in all of the WLAN equipment and eliminates possible bottlenecks a centralized architecture would introduce. The architecture is flexible and can easily support both small, transient networks and large, semipermanent or permanent networks. In addition, the architecture and protocols offer significant power saving and prolong the battery life of mobile equipment without losing network connectivity

Two network architectures are defined in the IEEE 802.11 standard: 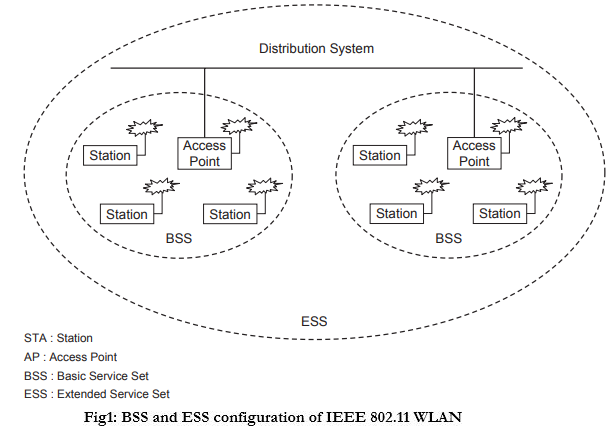 Independent basic service set: The IBSS configuration is referred to as an independent configuration or an ad-hoc network. An IBSS configuration is analogous to a peer-to-peer office network in which no single node is required to act as a server. IBSS WLANs include a number of nodes or wireless stations that communicate directly with one another on an ad-hoc, peer-to-peer basis. Generally, IBSS implementations cover a limited area and are not connected to any large network. An IBSS is typically a short-lived network, with a small number of stations, that is created for a particular purpose. 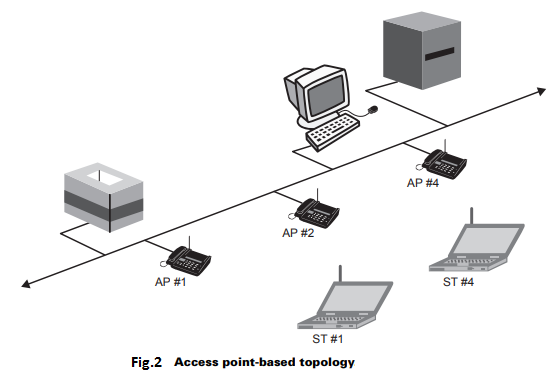 Extended service set: The ESS configuration consists of multiple basic service set cells that can be linked by either wired or wireless backbones called a distributed system. IEEE 802.11 supports ESS configurations in which multiple cells use the same channel to boost aggregate through put to network. The equipment outside of the ESS, the ESS and all of its mobile stations appear to be a single MAC layer network where all stations are physically stationary. Thus, the ESS hides the mobility of the mobile stations from everything outside the ESS (refer figure 1).