The name MPEG is an acronym for Moving Pictures Experts Group. MPEG is a method for video compression, which involves the compression of digital images and sound, as well as synchronization of the two.

There currently are several MPEG standards. 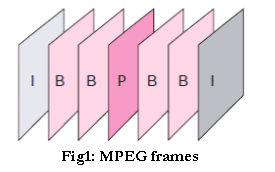 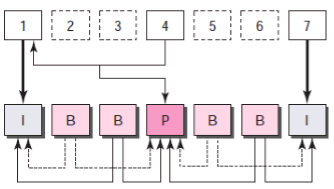 I-frames: An intracoded frame (I-frame) is an independent frame that is not related to any other frame.

They are present at regular intervals. An I-frame must appear periodically to handle some sudden change in the frame that the previous and following frames cannot show. Also, when a video is broadcast, a viewer may tune at any time. If there is only one I-frame at the beginning of the broadcast, the viewer who tunes in late will not receive a complete picture. I-frames are independent of other frames and cannot be constructed from other frames.

P-frames: A predicted frame (P-frame) is related to the preceding I-frame or P-frame. In other words, each P-frame contains only the changes from the preceding frame. The changes, however, cannot cover a big segment. For example, for a fast-moving object, the new changes may not be recorded in a P-frame. P-frames can be constructed only from previous I- or P-frames. P-frames carry much less information than other frame types and carry even fewer bits after compression.

B-frames: A bidirectional frame (B-frame) is related to the preceding and following I-frame or P-frame. In other words, each B-frame is relative to the past and the future. Note that a B-frame is never related to another B-frame.