Techniques that can be used to improve the quality of service as follows scheduling, traffic shaping, admission control and resource reservation.

A priority queue can provide better QoS than the FIFO queue because higher priority traffic, such as multimedia, can reach the destination with less delay.

3) Weighted Fair Queuing: A better scheduling method is weighted fair queuing. In this technique, the packets are still assigned to different classes and admitted to different queues. The queues, however, are weighted based on the priority of the queues; higher priority means a higher weight. The system processes packets in each queue in a round-robin fashion with the number of packets selected from each queue based on the corresponding weight.

The following is an algorithm for variable-length packets:

The token bucket algorithm allows idle hosts to accumulate credit for the future in the form of tokens. For each tick of the clock, the system sends n tokens to the bucket. The system removes one token for every cell (or byte) of data sent. For example, if n is 100 and the host is idle for 100 ticks, the bucket collects 10,000 tokens. Now the host can consume all these tokens in one tick with 10,000 cells, or the host takes 1,000 ticks with 10 cells per tick. In other words, the host can send bursty data as long as the bucket is not empty. Figure12shows the idea. 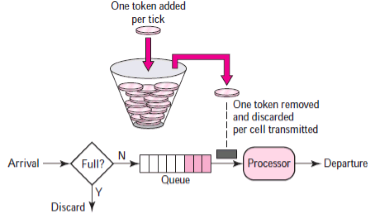