The mask itself consists of a patterned chromium (most common) emulsion, or iron oxide layer an a transparent fused-quartz. 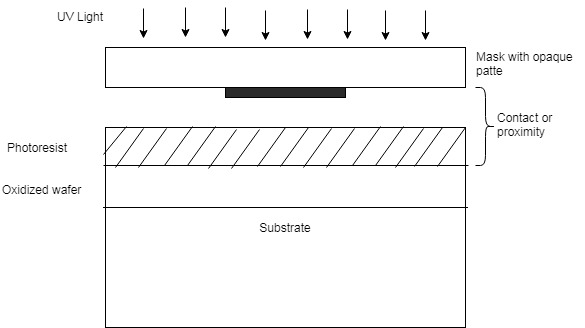 The pattern layout is generated using a CAD tool and transferred into the opaque layer at a specialized mask- making facility as electron beam or laser-beam writing.

Resolution is defined as the minimum feature the optical system can resolve which has limitations for micro aching applications.

∴projection lithography is a superiar approach but an optical projection system cn cost more than proximity or contact systems.

Topography on the surface of the wafer, such as deep cavities and trenches, are common in MEMS and pose challenges to both resist. Spinning and imaging.

Often, lithographic patterns on both sides of a wafer need to be aligned with respect to each other with high accuracy. E.g. the fabrication of commercial pressure sensor entails forming on the front side of the wafer piezoresistive sense elements that are aligned to the edges of a cavity on the back side of the wafer.