0
Write a short note on

• The DTMF dialing system traces its roots to a technique AT&T developed in the 1950s called MF (Multi-Frequency) which was deployed within the AT&T telephone network to direct calls between switching facilities using in-band signaling. 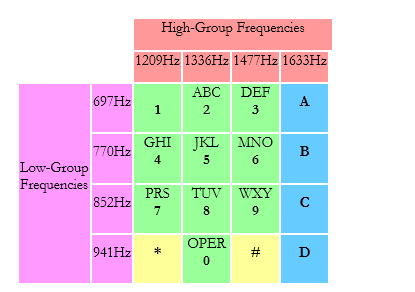 • The frequencies used were chosen to prevent any harmonics from being incorrectly detected by the receiver as some other DTMF frequency.

• The transmitter of a DTMF signal simultaneously sends one frequency from the high-group and one freqency from the low-group. This pair of signals represents the digit or symbol shown at the intersection of row and column in the table. For example, sending 1209Hz and 770Hz indicates that the "4" digit is being sent.

• For example, the key 1 produces a superimposition of tones of 697 and 1209 hertz (Hz). Initial pushbutton designs employed levers, so that each button activated two contacts. The tones are decoded by the switching center to determine the keys pressed by the user..

• DTMF was originally decoded by tuned filter banks. By the end of the 20th century, digital signal processing became the predominant technology for decoding. DTMF decoding algorithms often use the Goertzel algorithm to detect tones.

Haar wavelet transform may be considered to pair up input values, storing the difference and passing the sum. This process is repeated recursively, pairing up the sums to provide the next scale, which leads to $2^n-1$ differences and a final sum.

Z-transform converts a discrete-time signal, which is a sequence of real or complex numbers, into a complex frequency domain representation.

The inverse Z-transform is

where C is a counterclockwise closed path encircling the origin and entirely in the region of convergence (ROC). In the case where the ROC is causal (see Example 2), this means the path C must encircle all of the poles of X(z).

For a square image of size N×N, the two-dimensional DFT is given by:

The most common processing approach in the time or space domain is enhancement of the input signal through a method called filtering. Digital filtering generally consists of some linear transformation of a number of surrounding samples around the current sample of the input or output signal. There are various ways to characterize filters; for example:

• A "time-invariant" filter has constant properties over time; other filters such as adaptive filters change in time.