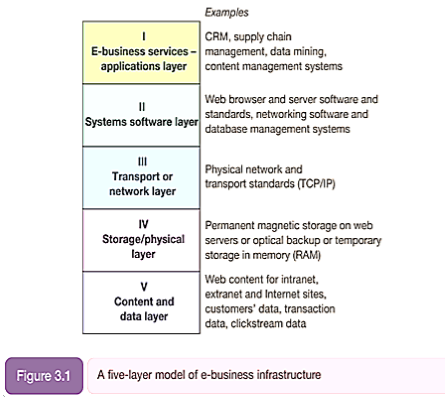 This systems software will then request transfer of the information about the holiday request across a network or transport layer (Level III in Figure 3.1).

The information will then be stored in computer memory (RAM) or in long-term magnetic storage on a web server (Level IV in Figure 3.1).

The information itself which makes up the web pages or content viewed by the employee and the data about their holiday request are shown as a separate layer (Level Vin Figure 3.1), although it could be argued that this is the first or second level in an e-business architecture.

Kampas (2000) describes an alternative five-level infrastructure model of what he refers to as 'the information system function chain':

some management issues of hosting e-business services are then reviewed, specifically management of Level I applications and services by external parties and how to manage staff access to the Internet. Finally, we focus on how new access platforms such as mobile phones and interactive digital TV will change the way the Internet is used in the future (Level II in Figure 3.1).