Solve any one question from Q1 and Q2

1 (a) The force system shown in Fig. 1(a) have a resultant of 200 N along positive Y-axis, determine the magnitude and position θ of force F.

(4 marks) 1 (b) Two blocks are connected by an inextensible string as shown in Fig. 1(b). If the system is released from rest, determine the velocity of the block A after it has moved 2 m by work energy principle. The coefficient of friction between block A and the plane is μS=0.25.

(4 marks) 1 (c) A stone is dropped from the top of a tower 50 m high. At the same time, another stone is thrown vertically upwards from the foot of tower with a velocity of 25 m/s. When and where the two stones cross each other?(4 marks) 1 (d) A cricket ball thrown by a fielder from a height of 2m at an angle of 45° to the horizontal with an initial velocity of 25 m/s hit the wicket at the height of 0.6m from the ground, find distance of fielder from the wickets:(4 marks) 2 (a) A semicircular area is cut from a trapezium as shown in Fig. 2(a). Determine the centroid of the shaded portion with respect to the origin.

(4 marks) 2 (c) A ball is dropped from an unknown height on a horizontal floor from which it rebounds to height of 8 m. If e=0.667, calculate the height from which the ball was dropped.(4 marks) 2 (d) A bullet moving at a speed of 300 m/s has its speed reduce to 270 m/s when it passes through a board. Determine how many such boards the bullet will penetrate before it stops.(4 marks)

Solve any one question from Q3 and Q4

3 (a) A simply supported beam AB of span 6m is loaded and supported as shown in Fig. 3(a). Find the reactions at supported A and B.

(6 marks) 3 (b) Determine the magnitude and direction of a resultant force of a given force system as shown in Fig. 3(b) and locate its point of application on the slab:

(5 marks) 4 (a) Determine the magnitude and position of force F so that the force system shown in Fig. 4(a) maintain equilibrium.

(6 marks) 4 (b) If each cable can sustain a maximum tension of 600 N, determine the greatest weight of the bucket and its contents that can be supported. Refer Fig. 4(b). 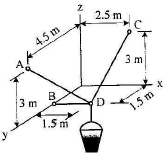 (6 marks) 4 (c) Determine the reactions at roller A and pin B for equilibrium of the member ACB as shown in Fig. 4(c). 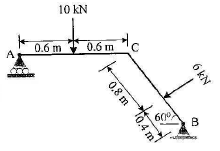 Solve any one question from Q5 and Q6

(6 marks) 5 (b) The uniform rod having a weight W and length L is supported at its ends A and B as shown in Fig. 5(b), where the coefficient of static friction μs=0.2. Determine the greatest angle θ so that the rod does not slip. Refer Fig. 5(c)

(6 marks) 6 (c) A force P=mg/6 is required to lower the cylinder with the cord making 1.25 turns around the fixed shaft. Determine the coefficient of friction μs between the cord and the shaft. Refer Fig. 6(c):