(i) Coal Delivery. The coal from supply points is delivered by ships or boats to power stations situated near to sea or river whereas coal is supplied by rail or trucks to the power stations which are situated away from sea or river. The transportation of coal by trucks is used if the railway facilities are not available.

(ii) Unloading. The type of equipment to be used for unloading the coal received at the power station depends on how coal is received at the power station. If coal is delivered by trucks, there is no need of unloading device as the trucks may dump the coal to the outdoor storage. Coal is easily handled if the lift trucks with scoop are used. In case the coal is brought by railway wagons, ships or boats, the unloading may be done by car shakes, rotary car dumpers, cranes, grab buckets and coal accelerators. Rotary car dumpers although costly are quite efficient for unloading closed wagons.

(iii) Preparation. When the coal delivered is in the form of big lumps and it is not of proper size, the preparation (sizing) of coal can be achieved by crushers, breakers, sizer’s driers and magnetic separators. 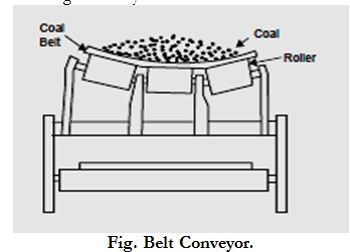 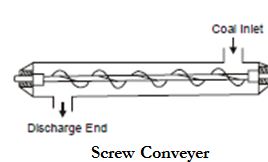 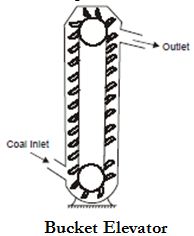 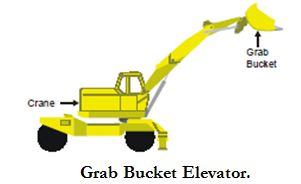 (i) They can be used to transfer coal as well as ash.

(ii) The speed of conveyor can be regulated easily.

(iii) They have a rugged construction.

(i) There is more wear due to dragging action.

(iv)Due to abrasive nature of material handled the speed of conveyors is low (10 to 30 m/min).

(v) Storage of coal. It is desirable that sufficient quantity of coal should be stored. Storage of coal gives protection against the interruption of coal supplies when there is delay in transportation of coal or due to strikes in coal mines. Also when the prices are low, the coal can be purchased and stored for future use. The amount of coal to be stored depends on the availability of space for storage, transportation facilities, the amount of coal that will whether away and nearness to coal mines of the power station. Usually coal required for one month operation of power plant is stored in case of power stations situated at longer distance from the collieries whereas coal need for about 15 days is stored in case of power station situated near to collieries. Storage of coal for longer periods is not advantageous because it blocks the capital and results in deterioration of the quality of coal.

The coal received at the power station is stored in dead storage in the form of piles laid directly on the ground. The coal stored has the tendency to whether (to combine with oxygen of air) and during this process coal loss some of its heating value and ignition quality. Due to low oxidation the coal may ignite spontaneously. This is avoided by storing coal in the form of piles which consist of thick and compact layers of coal so that air cannot pass through the coal piles. This will minimize the reaction between coal and oxygen. The other alternative is to allow the air to pass through layers of coal so that air may remove the heat of reaction and avoid burning. In case the coal is to be stored for longer periods the outer surface of piles may be sealed with asphalt or fine coal.

The coal is stored by the following methods:

(i) Stocking the coal in heats. The coal is piled on the ground up to 10-12 m height. The pile top should be given a slope in the direction in which the rain may be drained off. The sealing of stored pile is desirable in order to avoid the oxidation of coal after packing an air tight layer of coal. Asphalt, fine coal dust and bituminous coating are the materials commonly used for this purpose.

(ii) Under water storage. The possibility of slow oxidation and spontaneous combustion can be completely eliminated by storing the coal under water. Coal should be stored at a site located on solid ground, well drained, free of standing water preferably on high ground not subjected to flooding.

(vi)In Plant Handling From the dead storage the coal is brought to covered storage (Live storage) (bins or bunkers). In plant handling may include the equipment such as belt conveyors, screw conveyors, bucket elevators etc. to transfer the coal. Weigh Lorrie’s hoppers and automatic scales are used to record the quantity of coal delivered to the furnace.

(vii) Coal weighing methods. Weigh Lorries, hoppers and automatic scales are used to weigh the quantity coal. The commonly used methods to weigh the coal are as follows: (i) Mechanical (ii) Pneumatic (iii) Electronic. The Mechanical method works on a suitable lever system mounted on knife edges and bearings connected to a resistance in the form of a spring of pendulum. The pneumatic weights use a pneumatic transmitter weight head and the corresponding air pressure determined by the load applied. The electronic weighing machines make use of load cells that produce voltage signals proportional to the load applied.

The important factors considered in selecting fuel handling systems are as follows: