Definition: A binary tree is said to be a binary search tree if it is the empty tree or

Delete operation on binary search tree is more complicated, then add and search. Basically, in can be divided into two stages:

Now, let's see more detailed description of a remove algorithm. First stage is identical to algorithm for lookup, except we should track the parent of the current node. Second part is trickier. There are three cases, which are described below. 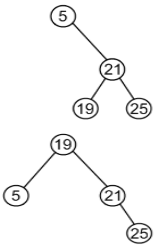 The same approach can be utilized to remove a node, which has two children: