• QPSK allows the signal to carry twice as much information as ordinary PSK using the same bandwidth.

• QPSK is used for satellite transmission of MPEG2 video, cable modems, videoconferencing, cellular phone systems, and other forms of digital communication over an RF carrier.

• Sometimes this is known as quadriphase PSK, 4-PSK, or 4-QAM. (Although the root concepts of QPSK and 4-QAM are different, the resulting modulated radio waves are exactly the same.)

• QPSK uses four points on the constellation diagram, equispaced around a circle. With four phases, QPSK can encode two bits per symbol, shown in the diagram with Gray coding to minimize the bit error rate (BER) — sometimes misperceived as twice the BER of BPSK.

• The mathematical analysis shows that QPSK can be used either to double the data rate compared with a BPSK system while maintaining the samebandwidth of the signal, or to maintain the data-rate of BPSK but halving the bandwidth needed. In this latter case, the BER of QPSK is exactly the same as the BER of BPSK - and deciding differently is a common confusion when considering or describing QPSK. The transmitted carrier can undergo numbers of phase changes.

• Given that radio communication channels are allocated by agencies such as the Federal Communication Commission giving a prescribed (maximum) bandwidth, the advantage of QPSK over BPSK becomes evident: QPSK transmits twice the data rate in a given bandwidth compared to BPSK - at the same BER. The engineering penalty that is paid is that QPSK transmitters and receivers are more complicated than the ones for BPSK. However, with modern electronics technology, the penalty in cost is very moderate.

• As with BPSK, there are phase ambiguity problems at the receiving end, and differentially encoded QPSK is often used in practice. 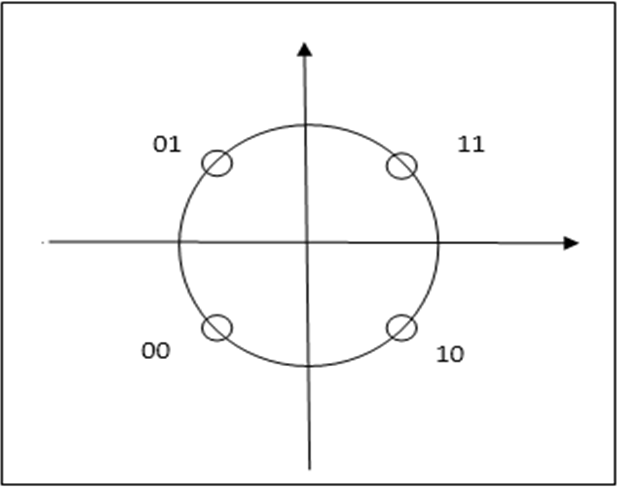 Constellation diagram for QPSK with gray coding. Each adjacent symbol only differs by one bit