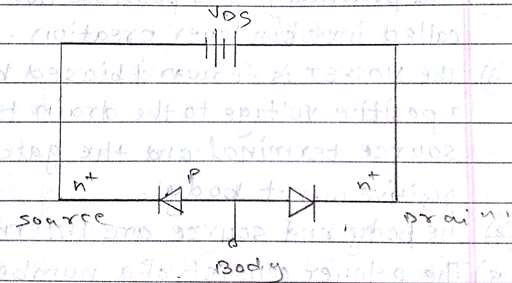 If gate to source voltage is zero $Vgs = 0$ in MOSFET is equivalent to two diodes connected back to back. The diodes are formed between $P$ and $n^+$ layer. The structure of MOSFET is similar to a BJT except for the presence of a MOS capacitor that isolates the gate and the body. **Depletion layer creation:** ![enter image description here][3] 1. Conduction can not take place through a MOSFET from drain to source due to the presence of P-layer. 2. But practically it is possible due to a phenomenon called inversion layer creation. 3. The MOSFET is forward biased by connecting a positive voltage to the drain terminal with respect to source terminal and the gate is made positive with respect to body. 4. The body and source are internally shorted. 5. The P-layer consist of a number of holes and a few electrons. 6. Due to the positive voltage applied the gate and body, the electrons are attracted towards the gate and gathered below the $SiO_2$ layer and produce a depletion region by combining with the holes. 7. If the gate voltage is increased further the number of electrons under the $SiO_2$ layer will increase and the total number of electrons will become more than the holes. 8. The value of gate to source voltage for which the number of electrons are more than number of holes is called the threshold voltage. 9. When the Vgs exceeds Vgs(th) an inversion layer is created which dominates over the P-layer.

Formation of an inversion layer: