TMN architecture: There are three architectural perspectives: functional, physical, and information, as shown in Figure1.

• The functional architecture identifies functional modules or blocks in the TMN environment, including the reference point between them. The requirements for interface are specified.

• The physical architecture defines the physical blocks and interfaces between them.

iii. Network management, both as a manager and an agent, is also considered to be an OS. This would include MIB in Internet management and naming tree in OSI management as a function of the OSF. 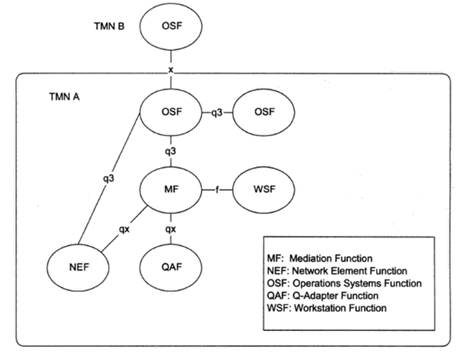 v. The network management agent and the associated MIB are part of the NEF. Network elements providing information for management, such as packets dropped, collision rate, etc., are considered as part of TMN, i.e. NEF.

vi. The TMN MF block addresses the operations performed on the information content passing between the network elements and operations systems. Such operations include filtering, store and forward, protocol conversion, threshold detection, etc.

vii. A physical entity in which the MF is implemented can be shared between multiple operations systems and network elements. The TMN WSF provides an interface between human personnel and TMN activities. More specifically, this function addresses the presentation aspect. The conversion function that converts machine-readable information to human-interpretable format in the presentation function belongs in one of the other three function blocks, OSF, MF, and QAF.

i. Model for the TMN physical architecture, shown in Figure3. A TMN physical block could be an embodiment of one or more blocks, besides its equivalent function block. For example, an operations system could have its operation function as well as mediation device, which does filtering of information.

ii. There are five types of physical blocks representing the five functions discussed. Operations systems are embodiments of TMN OSF. It is connected to the mediation device, placing the MF on a data communication network.

iii. The data communication network is the physical implementation of DCF, which to repeat, is not a function block, but a TMN function, DCF. The network elements, Q adapter, and workstations reflect their respective TMN functions

iv. The Q, F, and X TMN interfaces between the physical devices are also shown in Figure3, representing the physical implementation of the respective TMN reference points. The Q3 interface is used between the OS and either an NE or a QA.

v. The Qx interface is shown between MD and QA/NE. An example of this would be an MD being a proxy server communicating with legacy systems via the QA interface. The F interface is implemented to connect a workstation to TMN. The X interface is between the operations systems belonging to two different TMNs. 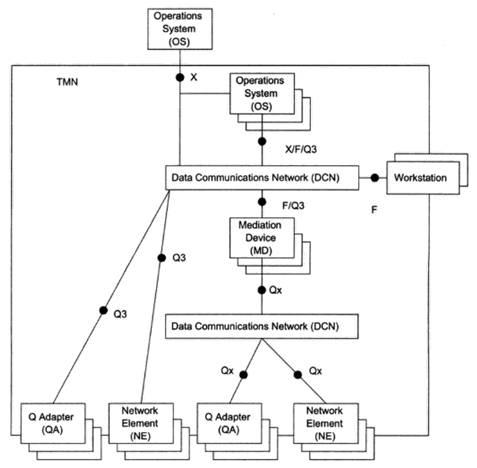 i. Figure4 shows the information exchange between the two types of entities.

iv. The information architecture should transport information reliably across the functional boundaries. There are two types of communication services between interfaces: interactive and file oriented. Interactive service is supported in OSI by CMISE over Remote Operations Service Element (ROSE).

vi. In the OSI model, Association Control Services Element (ACSE) is needed to establish, release, and abort application associations. In the Internet model, this is integrated in RPC presentation service.

• The NOC is in constant search for efficient integrated network management systems required to monitor, interpret, and control the behavior and performance of the network, its hardware devices and software resources.

• The network management architecture consists of the following:

• The three network management architectures are:

• With a centralized architecture a single management system installation monitors the whole network.

• This installation may consist of one or more servers due to hardware limitations.

• If more than one server is used, it is considered as a centralized architecture when all servers are located at the same NOC.

• NOC operators from each of the regions use clients to remote connect to the centralized management servers located in another region. 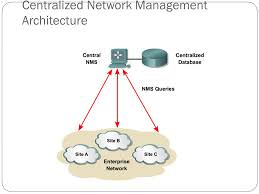 • With this architecture, the network management system consists of:

o only one management system is needed

o has a variety of management tools associated with it.

o causing congestion or failure on the Network Interface.

• With a distributed architecture, multiple installations of management systems are used to monitor the whole network. Each management system is installed at a NOC that is responsible to monitor a geographical or administration region / domain, i.e. it is a Domain Manager.

• A distributed network that spans three regions, is managed from three NMS servers each one located at a regional Network Operating Center (NOC). NOC operators of a region use clients to locally connect to their server that manages the part of the network installed at their region. 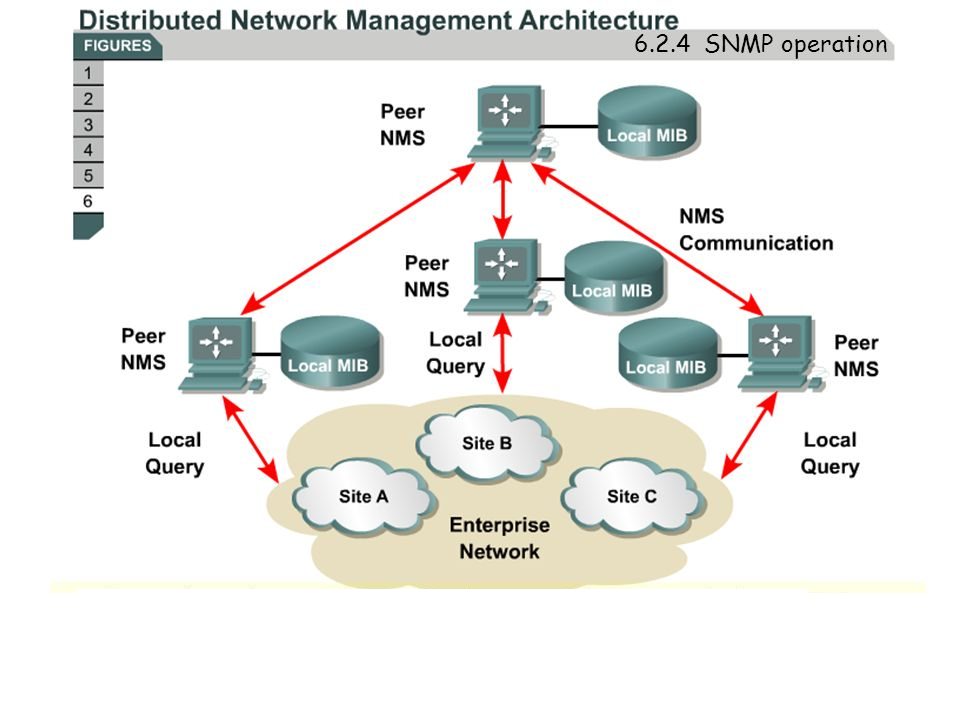 With this architecture, the network management system consists of:

• With a hierarchical architecture, multiple installations of management systems are used to monitor the whole network.

• Each management system is installed at a NOC that is responsible to monitor a geographical or administration region / domain, i.e. it is a Domain Manager.

• There is no communication between domain managers, information flow follows the hierarchy. The hierarchy can be further expanded by adding additional layers of MoMs and therefore is quite scalable.