i. It multiplexes a number of DS-n or E1 signals into a single OC-N signal

ii. It consists of a controller, low-speed interfaces for DS-n or E1 signals, an OC-N interface, and a time slot interchanger (TSI)

iii. It works also as a demultiplexer. In Terminal Multiplexer – Tributaries may be electrical or optical.

iv. It Works as termination of the Path layer; Write POH (Path Overhead) 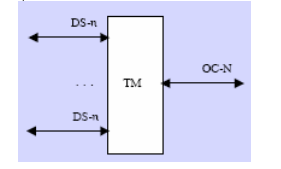 i. It is a more complex version of the TM.

iv. Direct access to the SONET/SDH-frames in the bit stream.

i. SONET/SDH ADM devices are typically connected to form a SONET/SDH ring.

ii. SONET/SDH rings are self-healing, that is they can automatically recover from link failures. 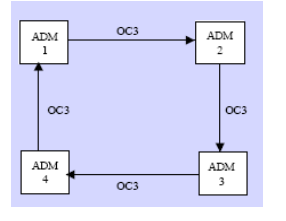 i. It is used to interconnect multiple SONET rings.

ii. It is connected to multiple incoming and outgoing OC-N interfaces. It can drop and add any number of DSn and/or OC-M signals, and it can switch DSn and/or OCM signals from an incoming interface to any outgoing one.