i) Coning of Wheels 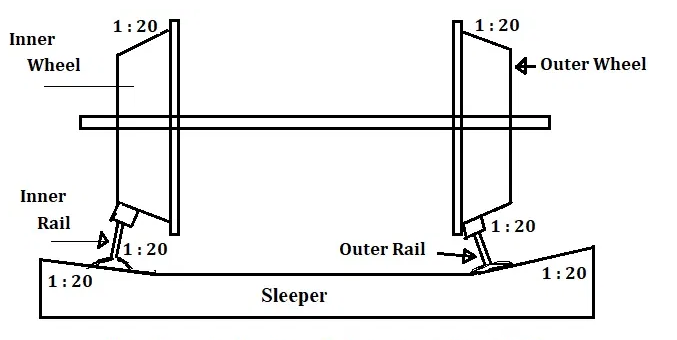 Creep of Rail is characterized as a longitudional development of rail regarding sleeper. Rail tend to slowly move toward predominant traffic. The jerk of rail is normal to all rail line tracks and its worth differs from barely anything sometimes to around 130 mm/month in creep.

1. Speed increase or Starting of Train :

At the hour of speed increase, Wheel gives parallel push which causes creep of rail.

2. Deaccelerating or Stopping of Train :

On the off chance that abrupt halting of train happens, slowing down impact will in general push the rail forward and subsequently causes creep forward way.

As train is passing under the rolls the piece under the moving wheels is packed and discouraged somewhat because of wheel loads. As more the wheel moves this downturn likewise moves and the piece which is under despondency already returns to its unique position.

In addition to this creep of rail may also be caused due to following reasons.

1. b What is Ballast? Write Function and requirement of good ballast.

Ballast is a granular material which is placed and packed below and around the railway sleepers. Different types of ballast materials used are broken stone, sand, gravel, moorum, brickbats etc. The main purpose of ballast is to transmit the load from sleepers to the formation(consolidated track bed) and to provide drainage facilities to the track.

Function of the Ballast:

2 (b) Explain different types of gradient used in railway.

The various gradient used on railway tracks can be classified under the following heads:

a. Ruling Gradient: The reasonable inclination normally gave in a rail line track is known as the decision angle. It is the greatest inclination permitted on the specific track area. Administering inclination mostly relies on the force of the train.

For the most part, with one train, the accompanying decision slopes are embraced in India.

b. Momentum Gradient: The rising inclination which is trailed by a falling angle and along which trains climb all the more effectively because of force procured by them over the falling slope is called energy slope. Accordingly a force slope can be more extreme than the decision inclination.

c. Pusher Gradient: The rising slope which is more extreme than the decision inclination and along which trains require extra trains to ascend the track is known as the pusher angle. These sorts of angles are vital in uneven territory where more extreme slopes are important to decrease the length of the track.

This is a problematic situation where the super elevation fundamental for the normal speed of trains running over the principle line bend can't be given.