0
Explain the working of a torboprop engine by means of a sketch what are its advantages, limitations and applications? 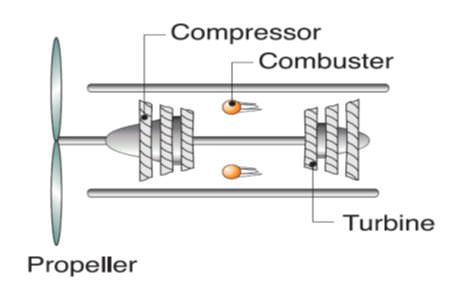 Main components of turboprop engine are (i) a propeller, (ii) a gear reduction unit, (iii) a compressor, (iv) a gas turbine and the nozzles.

The power required to drive a compressor and the propeller is obtained from the gas turbine.

The propeller is driven through the gear reduction unit by the gas turbine which draws a large amount of air. Large part of the air drawn by the propeller is passed through the ducts around the engine and the remainder is compressed in the diffuser by ram compression and again in the compressor.

The high temperature gases, generated by burning the fuel in combustor, are expanded in the turbine and eventually over the nozzles.

Total thrust developed is the sum of thrusts developed by the propeller and the nozzle.

The pressure ratio for expansion in the turbine is much higher than that of turbojet engine.

The propellers are best suited for low speeds( <300 MPH) flight.