Control structure testing is a group of white-box testing methods.

1) Branch Testing:- For every decision, each branch needs to be executed at least once also called decision testing.

Treats a compound conditional as a single statement. (We count each branch taken out of the decision, regardless which condition lead to the branch.)

This example has two branches to be executed:

This examples also has just two branches to be executed, despite the compound conditional:

This example has four branches to be executed:

Obvious decision statements are if, for, while, switch.

For this course you don't need to write test cases for IO Exception and Out Of Memory exception.

Condition testing is a test construction method that focuses on exercising the logical conditions in a program module.

Errors in conditions can be due to:

definition: "For a compound condition C, the true and false branches of C and every simple condition in C need to be executed at least once."

Multiple-condition testing requires that all true-false combinations of simple conditions be exercised at least once.

Therefore, all statements, branches, and conditions are necessarily covered.

Selects test paths according to the location of definitions and use of variables. This is a somewhat sophisticated technique and is not practical for extensive use. Its use should be targeted to modules with nested if and loop statements.

Loops are fundamental to many algorithms and need thorough testing.

There are four different classes of loops: simple, concatenated, nested, and unstructured. 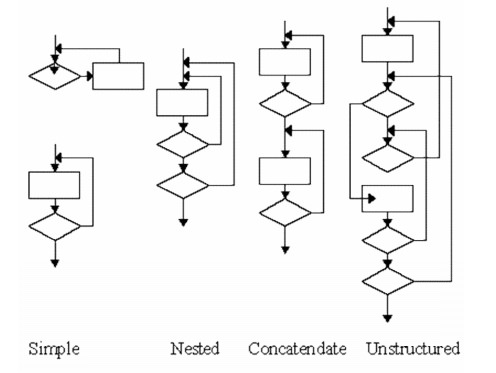 Create a set of tests that force the following situations:

Simple Loops, where n is the maximum number of allowable passes through the loop.

o Start with inner loop. Set all other loops to minimum values.

o Continue until all loops tested.