0
9.4kviews
Draw and explain different states of devices in Bluetooth?

Different states of devices in Bluetooth are shown below: 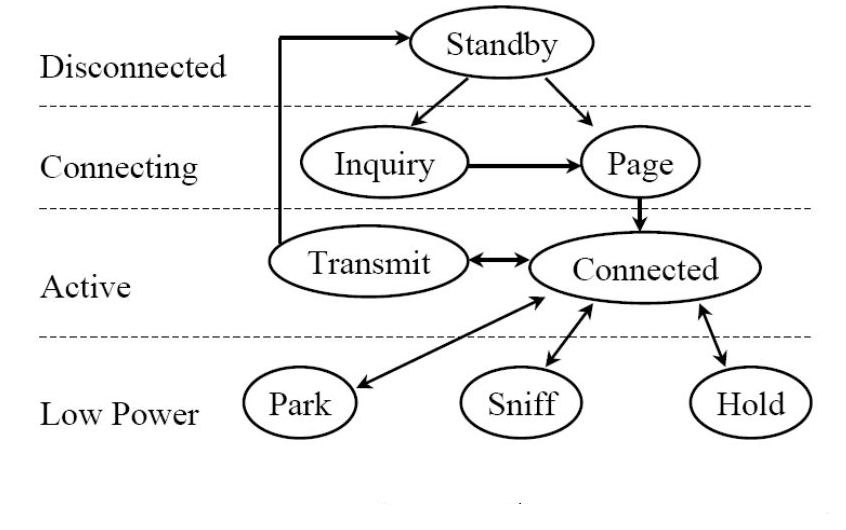 Before any connection in a piconet is created, all devices are in STANDBY mode. In this mode, an unconnected unit periodically listens for messages every 1.28 seconds. Each time a device wakes up, it listens on a set of 32 hop frequencies defi ned for that unit. The number of hop frequencies varies in different geographic regions. The connection procedure is initiated by any one of the devices, which then becomes master. A connection is made by a PAGE message if the address is already known, or by an INQUIRY message followed by a subsequent PAGE message if the address is unknown. In the initial PAGE state, the master unit sends a train of 16 identical page messages on 16 different hop frequencies defi ned for the device to be paged (slave unit). If no response is received, the master transmits a train on the remaining 16 hop frequencies in the wake-up sequence. The maximum delay before the master reaches the slave is twice the wake-up period (2.56 seconds) while the average delay is half the wake-up period (0.64 seconds). The INQUIRY message is typically used for fi nding Bluetooth devices, including public printers, fax machines, and similar devices with an unknown address. The INQUIRY message is similar to the PAGE message, but may require one additional train period to collect all responses. A power saving mode can be used for connected units in a piconet if no data needs to be transmitted. The master unit can put slave units into HOLD mode, where only the internal timer is running. Slave units can also demand to be put into HOLD mode. Data transfer restarts instantly when units transition out of HOLD mode. The HOLD is used when connecting several piconets or managing a low-power device such as a temperature sensor. Two more low-power modes are also available: the SNIFF mode and PARK mode. In the SNIFF mode, a slave device listens to the piconet at a reduced rate, thus reducing its duty cycle. The SNIFF interval is programmable and depends on the application. In the PARK mode, a device is still synchronized to the piconet but does not participate in the traffi c. Parked devices have given up their MAC address and occasionally listen to the traffi c of the master to resynchronize and check on broadcast messages.