0
5.2kviews
What is the need of DWDM? Explain its working principal?

Telecommunications makes wide use of optical techniques in which the carrier wave belongs to the classical optical domain. The wave modulation allows transmission of analog or digital signals up to a few gigahertz (GHz) or gigabits per second (Gbps) on a carrier of very high frequency, typically 186 to 196 THz. In fact, the bitrate can be increased further, using several carrier waves that are propagating without significant interaction on a single fiber. It is obvious that each frequency corresponds to a different wavelength. Dense Wavelength Division Multiplexing (DWDM) is reserved for very close frequency spacing.

Dense wavelength division multiplexing (DWDM) is a technology that puts data from different sources together on an optical fiber, with each signal carried at the same time on its own separate light wavelength. Using DWDM, up to 80 (and theoretically more) separate wavelengths or channels of data can be multiplexed into a lightstream transmitted on a single optical fiber.

A key advantage to DWDM is that it’s protocol and bitrate independent. DWDM-based networks can transmit data in IP, ATM, SONET, SDH and Ethernet. Therefore, DWDM-based networks can carry different types of traffic at different speeds over an optical channel. Voice transmission, email, video and multimedia data are just some examples of services which can be simultaneously transmitted in DWDM systems. DWDM systems have channels at wavelengths spaced with 0.4 nm spacing. 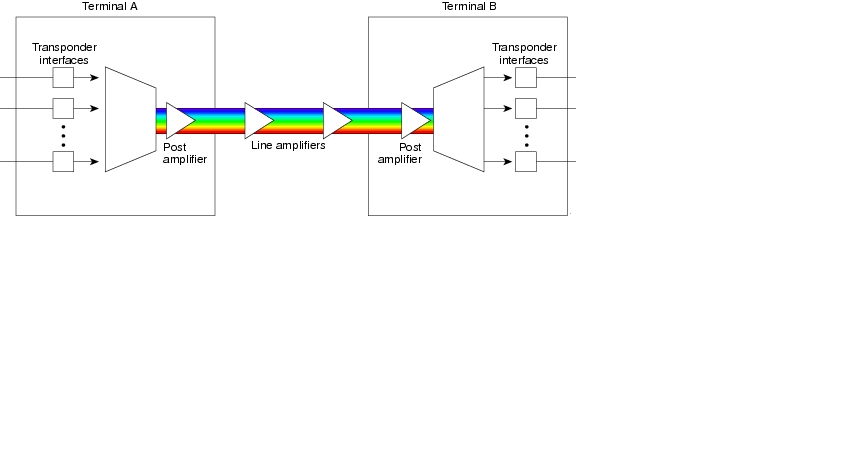