1
12kviews
With a neat diagram explain ATM protocol architecture, bringing out the functions of ATM Layers and various AAL layers?

The ATM architecture uses a logical model to describe the functionality that it supports. ATM functionality corresponds to the physical layer and part of the data link layer of the OSI reference model.

The ATM reference model, as shown in Fig. consists of the following planes, which span all layers:

• Control—This plane is responsible for generating and managing signaling requests.

• User—This plane is responsible for managing the transfer of data.

The ATM reference model consists of the following ATM layers: 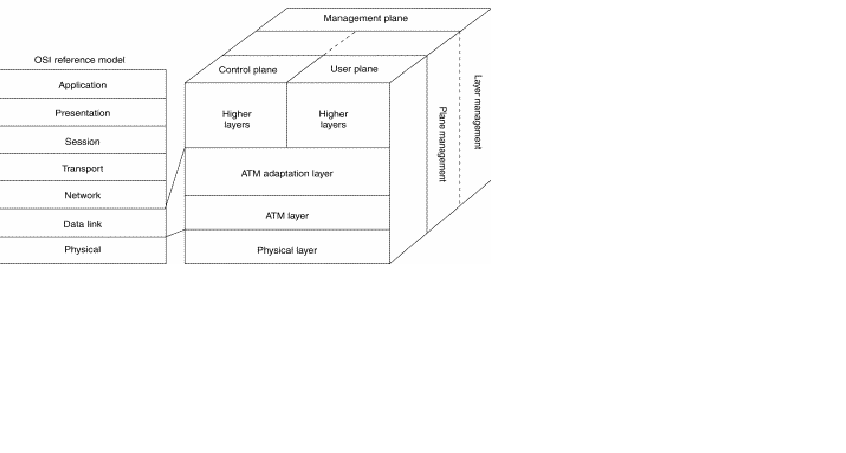 ATM layer—Combined with the ATM adaptation layer, the ATM layer is roughly analogous to the data link layer of the OSI reference model. The ATM layer is responsible for the simultaneous sharing of virtual circuits over a physical link (cell multiplexing) and passing cells through the ATM network (cell relay). To do this, it uses the VPI and VCI information in the header of each ATM cell.

ATM adaptation layer (AAL)—Combined with the ATM layer, the AAL is roughly analogous to the data link layer of the OSI model. The AAL is responsible for isolating higher-layer protocols from the details of the ATM processes. The adaptation layer prepares user data for conversion into cells and segments the data into 48-byte cell payloads. Finally, the higher layers residing above the AAL accept user data, arrange it into packets, and hand it to the AAL.

The main functions of the ATM physical layer are as follows:

4.Cells are packaged into the appropriate types of frames for the physical medium

ATM Layer The ATM layer provides routing, traffic management, switching and multiplexing services. It processes outgoing traffic by accepting 48-byte segment from the AAL sub-layers and transforming them into 53-byte cell by addition of a 5-byte header.

ATM adaptation layers allow existing packet networks to connect to ATM facilities. AAL Protocol accepts transmission from upper layer services (e.g.: packet data) and map them into fixed-sized ATM cells. These transmissions can be of any type, variable or fixed data rate. At the receiver, this process is reversed and segments are reassembled into their original formats and passed to the receiving services. Instead of one protocol for all types of data, the ATM standard divides the AAL layer into categories, each supporting the requirements of different types of applications. There are four types of data streams that are identified: Constant-bit rate, variable bit-rate, connection oriented packet data transfer, connectionless packet data transfer. In addition to dividing AAL by category (AAL1, AAL2 and so on), ITU-T also divides it on the basis of functionality. Each AAL layer is actually divided into two layers: the convergence sub-layer and Segmentation and reassembly (SAR) sub-layer