• Even though the secondary of transformer is open, transformer draws current from the supply when primary winding is excited by the rated voltage

• But due to non linearities of core material such as hysteresis and saturation, the no load current is not sinusoidal in nature

• Let V, be the rated voltage applied to the primary

• The applied voltage and induced emf are sinusoidal in nature

• The flux must lag the applied voltage by 90°

• The no load current waveform can be obtained graphically from the hysteresis curve i.e. $\Phi-\mathrm{I}_{0}$, as shown in figure below 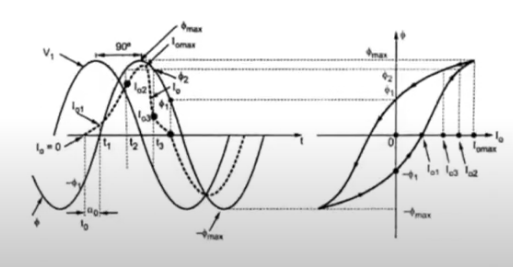