seconds. It listens the messages on a set of 32 hop frequencies defined for that unit.

The device is said to be wake-up when it listens to messages. When it does not listen

to messages, it is said to be in sleep.

becomes master. A connection is made by PAGE message if the address is

frequencies defined for device to be paged (slave).

frequencies in wake-up sequence i.e. when the slave listens on messages in

seconds) while average delay is half the wake-up period(0.64 sec).

subsequent PAGE message if the address is unknown. 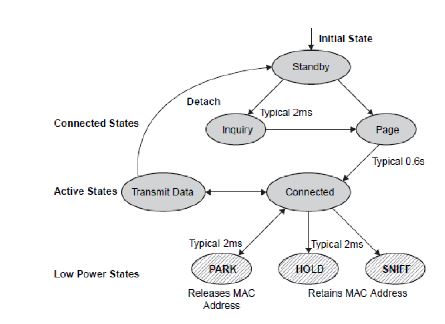