At the diversion structure, a headwork regulates the flow into a canal. This canal, which takes its supplies directly from the river, is called the main canal and usually direct irrigation from the waters of this canal is not carried out. This acts as a feeder channel to the branch canals, or branches. Branch canals generally carry a discharge higher than 5 m3/s and acts as feeder channel for major distributaries which, in turn carry 0.25 to 5 m3/s of discharge. The major distributaries either feed the water courses or the minor distributaries, which generally carry discharge less than 0.25 m3/s. A typical layout of an irrigation canal system may be seen in Figure 110 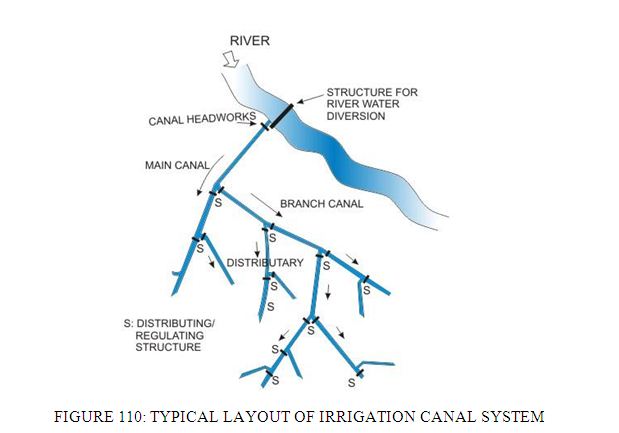 It may be observed that whenever a channel off-takes from the corresponding main branch there has to be gated structures just downstream of the bifurcation, for controlling the water level upstream of the point as well as to control the amount of water going into the off take and the main branches.