(a) The outlet should be strong, with no moving parts liable to damaged or requiring periodic attention or maintenance.

(b) It should be so design that the farmer cannot temper with the functioning and any interference from him should be detectable.

(c) Since a large number of outlets are fixed on a distributing channel, the most essential requirement is that it should be cheap.

(d) The design should be simple so that it can be constructed or fabricated by local mason or technicians.

(e) It should be possible for the outlets to work efficiently with a small working head.

It is provided in the form of simple opening made in the canal banks which water from parent channel to field channel. The opening may be circular or rectangular in shape. In the former pipeline may be used. Th rectangular tunnel or barrel may be constructed of masonry. Figure below shows the longitudinal section of a non-modular outlet. The diameter of the pipe may range from 10 to 30 cm. The pipeline is laid on light concrete foundation to prevent possibilities of settlement

The opening is generally drowned and hence the outlet discharge depends on the difference of water level of parent and field channel. The loss of head through pipe is given by well-known relation

First term gives entry loss, second friction loss and third velocity at the exit. Discharge is given by q= Ka/Kh. So as far as possible the pipeline or the rectangular channel is constructed at right angles to the parent channel. The pipeline or the barrel is generally laid in horizontal position. When the outlet is feared to draw more silt share, the pipeline may be laid in inversely inclined position with a raise of 1 in 12

Out of these types, Crump’s adjustable proportional module is widely used in Punjab.

When a pipe outlet discharges freely in the atmosphere, the discharge through the outlet is not dependent in any way on the water level in the water course. In such case pipe outlet can be said to be working as a semi-module.

It consists of a bell mouth orifice. It is made of cast iron. The orifice abuts against a truncated cone which is slightly bigger in diameter than the orifice. An air vent pipe is fitted at the junction of the cone and the orifice. The air vent pipe is kept sloping and is protected by an angle iron on the outer side

Minimum modular head is 0.22H, where H is the depth of water over the centre of the orifice. The water discharge at the atmospheric pressure from the bell mouth orifice into the truncated cone. The water is led further through cast iron expansion pipe to the concrete pipe and from there to the water course.

The outlet is cast in definite sizes for fixed value of discharge. The intermediate discharges may be obtained by raising or lowering the outlet orifice. This type of outlet is open to tampering easily by closing air vent.

This causes the pressure drop in the chamber because the entering water jet sucks the air of the chamber. This increases the discharge of the outlet. This type of outlet is not very much in use

The outlet discharge is given by the following formula:

q = A.C. √2gH where A is cross sectional area of the pipe at throat

H is depth of water from centre of orifice to FSL

This was first constructed on the Bari Doab canal in Punjab. Later-on this type was modified slightly and a standardize Punjab open fume outlet evolved and widely adopted. The main features of the two-sub type are:

It is nothing but a weir with contracted throat followed by an expanding fume on the downstream. The length of the weir crest is 2.5G, where G is the overhead weir crest in m 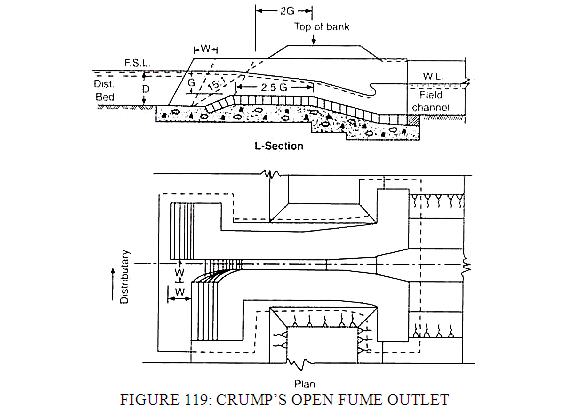 Owing to fluming hypercritical velocity is generated on d/s of the crest and hydraulic jump occurs. It is also, therefore, independent of the water level in field channel. Upstream wing wall is made smaller by the distance equal to the width of opening of the outlet at its mouth. If it is equal to W, wing wall is set back by W and its value is given by

The set back was provided to enable the outlet to make fair share of silt. The length of the fume downstream of crest will naturally be equal to the horizontal length of the distributary bank. The discharge of the outlet is given by the equation:

where G = Head over crest in m

Figure below shows the Punjab fume outlet. Only differences are that the approaches have been modified to introduce more silt into the outlet and the length of the throat is kept equal to 2G 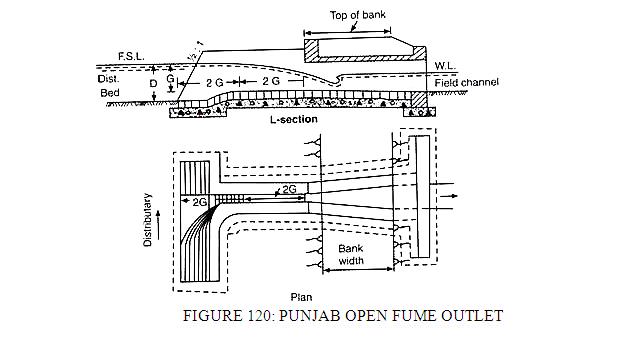 Generally, abbreviation APM is used for this type. It is also called adjustable orifice semi-module. Figure 121 gives plan and longitudinal section of APM. In this type, a cast iron roof block is provided by bolts in masonry at the entrance end. This block is given lemniscate curve at lower end of the entrance side. It is given a tilt of 1 in 7. At the sill, also, a cast iron base is provided. A check plate 0.3m is also provided. To facilitate smooth water entry upstream wing wall is made smaller in length. There is a throat of uniform width for about 0.60m.

Then the side wall diverges out with a radius of 7.625m. The bed of the outlet is laid with a slope of 1 in 15 till it joints the bed of water course. Whole outlet is constructed with masonry. Thus, this outlet is perfectly rigid, once the block is fixed. But at the same time after dismantling the masonry slightly, the opening can be adjusted by lowering or raising the roof block.

Velocity of water in the outlet barrel is above critical. As a result, hydraulic jump occurs on the sloping bed of the outlet, downstream of the crest. This makes the outlet discharge independent of the flow condition in the field channel.

The discharge through the outlet is given by:

where q = outlet discharge in cumecs

B = width of the outlet opening in m

Y = height of the opening above the crest in m 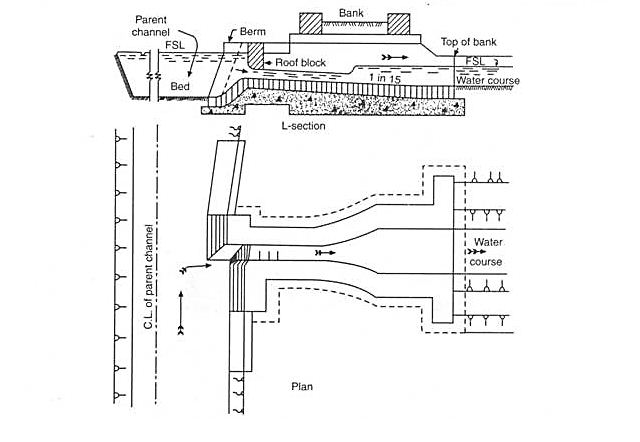 Description of Gibb’s module is given below:

Irrigation water in taken through an inlet pipe to a rising pipe. The rising pipe is in the form of a spiral. Generally, it is semi-circular. The water when flows through it are turned trough 180◦. During the movement in the rising pipe, vortex motion is developed. As the flow is continuous, angular velocity of the flow is same

Where v is the tangential velocity and r is the radius of flow.

The rising spiral pipe is connected to an eddy chamber. Figure 122 shows the plan and longitudinal section of Gibb’s module. It gives a clear idea about the arrangements of the component parts 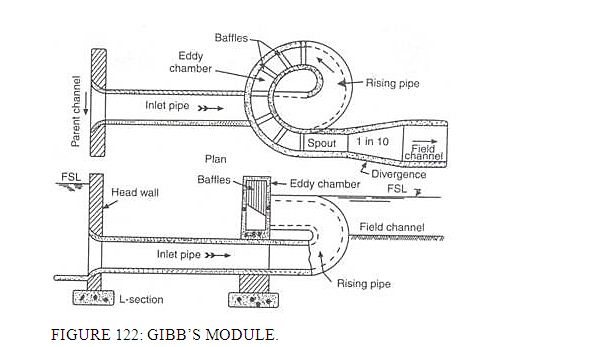 The eddy chamber is rectangular in section but semi-circular in plan with the horizontal floor. It takes the back water in the original direction of flow. In the eddy chamber baffles are provided at equal distance to dissipate excess energy of flow and to maintain a constant discharge.

This arrangement helps in maintaining constant discharge. When the energy of incoming water is more, for perfect dissipation of energy the length of eddy chamber and in turn the number of baffle is increased. This is attained by giving one full turn to the eddy chamber in addition to the previous half turn.

Thus, the eddy chamber is given one and a half turn. After the excess flow of energy is destroyed and discharge is made constant, the water from the eddy chamber is taken into a spout. The spout is connected to a field channel by means of expansion walls. The walls are generally splayed with 1 in 10 (lateral: longitudinal) expansion

The Gibb’s module can be design to give 0.03 cumecs constant discharge for modular range of 0.3m. The minimum work head required to maintain this discharge is 0.12m. At this stage, it can be realised that as modular outlets require complicated arrangement of parts, it is quite expensive. Secondly in alluvial tracts the silt trouble is more.