2
What are O type tube? Explain them.

In O – type tube a magnetic field whose axis coincides with that electron beam is used to hold the beam together as it travels the length of the tube. It is also called as linear beam tube.

Klystrons and TWT’s are linear beam or O type tubes in which the accelerating electric field in the same direction as the static magnetic field used to focus the electron beam.

A klystron is a vacuum tube that can be used either as a generator or as an amplifier of power at microwave frequencies. This was invented by Russel H. Varian at Stanford University in 1939 in association with his brother S.P. Varian. We study a two-cavity klystron amplifier, multicavity klystron, two cavity klystron oscillators and reflex klystron in this section.

A two-cavity klystron amplifier is shown in Fig. which is basically a velocity is modulated tube. Here high velocity electron beam is formed, focused and sent down along a glass tube through an input cavity (buncher), a field free drift space and an output cavity (catcher) to collector electrode/anode.

The anode is kept at a positive potential with respect to cathode. The electron beam passes through a gap ’A’ consisting of two grids of the buncher cavity separated by a very small distance and two other grids of the catcher cavity with small gap ‘B’. The input and output are taken from the tube via resonant cavities with the aid of coupling loops.

The RF signal to be amplified is used for exciting the input buncher cavity thereby developing an alternating voltage of signal frequency across the gap A.

Let us now consider the effect of this gap voltage on the electron beam passing through gap A. The situation is best explained by means of an Applegate diagram shown in Fig. 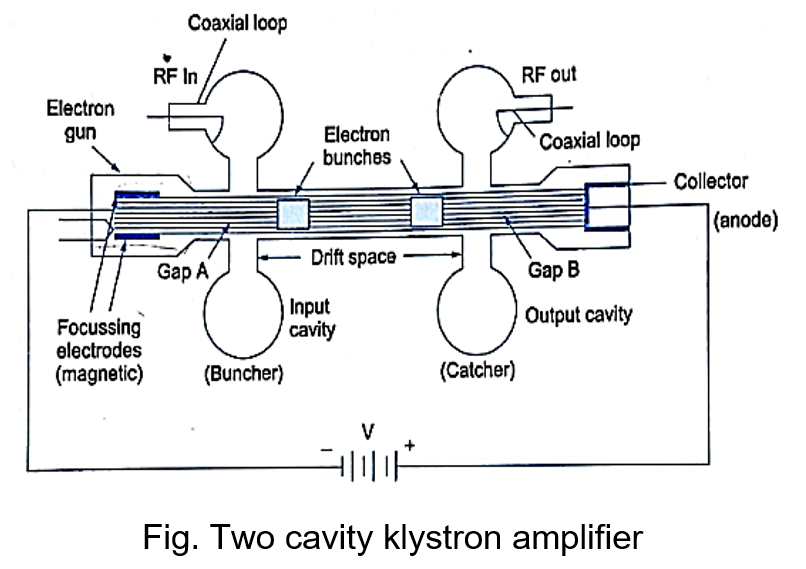 At point B' on the input RF cycle, the alternating voltage is zero and going positive. At this instant, the electric field across gap A is zero and an electron which passes through gap A at this instant is unaffected by the RF signal. Let this electron be called the reference electron $e_R$ which travels with an unchanged velocity $v_0=\sqrt{2eV/m}$ where V is the anode to cathode voltage. 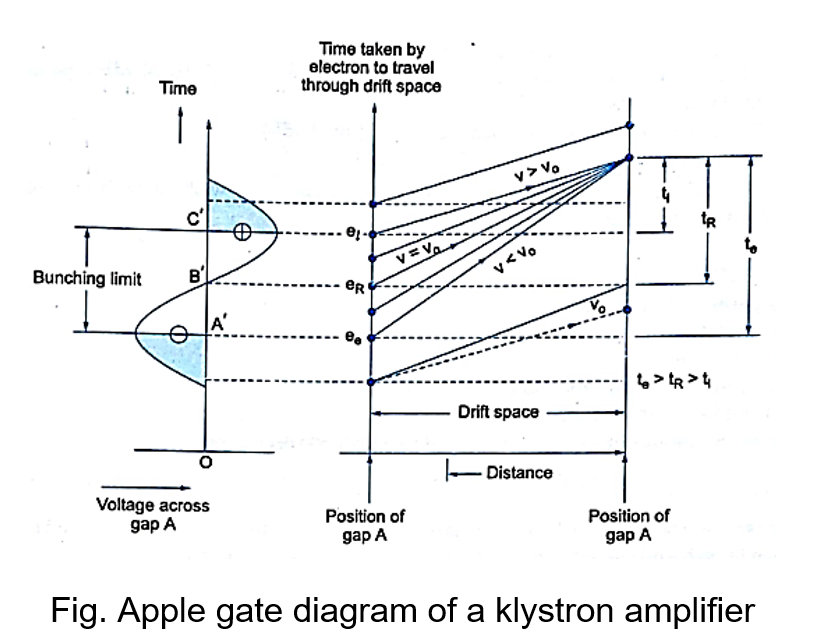 Therefore, the velocity of electron varies in accordance with RF input voltage, resulting in velocity modulation of the electron beam.

As a result of these actions, the electrons in the bunching limit (between points 'A" and 'C") gradually bunch together as they travel down the drift space, from gap A to gap B. The pulsating stream of electrons passes through gap Band excite oscillations in the output cavity (catcher). The density of electrons passing the gap B vary cyclically with time, that is the electron beam contains an ac current and is current modulated. The drift space converts the velocity modulation into current modulation.

Bunching occurs only once per cycle centered around the reference electron. With proper design (optimum gap widths, anode to cathode voltage, drift space length etc.), a little RF power applied to the buncher cavity results in large beam currents at the catcher cavity with a considerable power gain.

a. In UHF TV transmitters.

b. In troposphere scatter transmitters.

It consists of an electron gun, a filament surrounded by cathode and a focusing electrode at cathode potential as shown in Fig. The electron beam is accelerated towards the anode cavity (positive potential). After passing the gap in the cavity; electrons travel towards a repeller electrode which is at a high negative potential VR. The electrons neve trach the repeller because of the negative field and are returned back towards the gap. Under suitable conditions, the electrons give more energy to the gap than they took from the gap on their forward journey and oscillators are sustained. 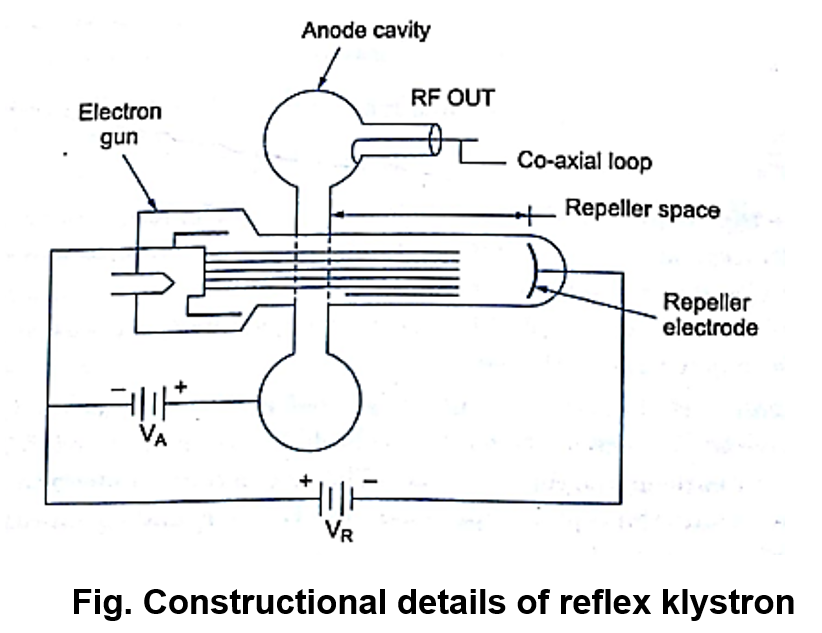 It is assumed that oscillators are set up in the tube due to noise or switching transients and these oscillations are assumed by device operation. This can be explained by Applegate diagram, show in fig.

The RF voltage that is produced across the gap by the cavity oscillations act on the electron beam to cause velocity modulation. eR is the reference election passes through the gap when the gap voltage is 0 and going negative. 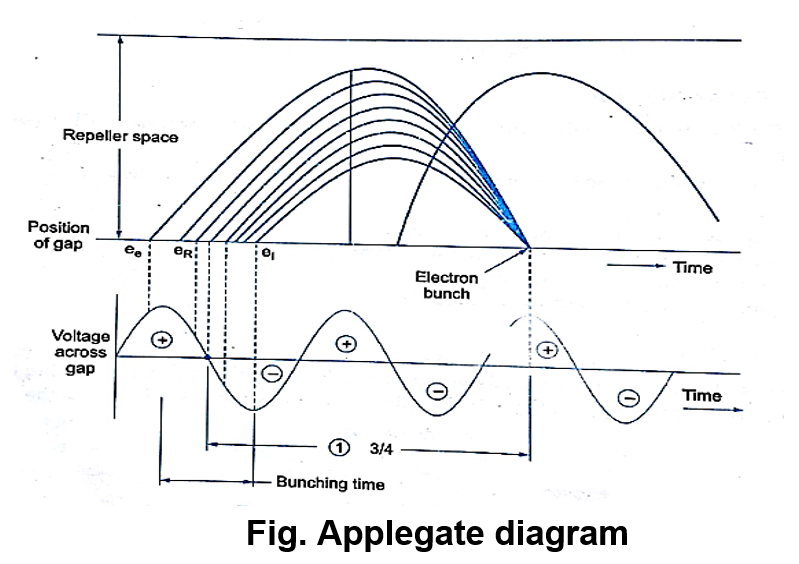 Electron $e_R$ is unaffected by the gap voltage. This moves towards the repeller and gets reflected by the negative voltage on the repeller. It returns and passes through the gap for second time.

The late electron $e_l$ that passes the gap later than reference electron $e_R$ experiences a maximum negative voltage and moves with a retarding velocity. The return time is shorter as the penetration into repeller space is less and catches up with $e_R$ and $e_e$ electrons forming a bunch. Bunches occur once per cycle centered around the reference electron e and these bunches transfer maximum energy to the gap to get sustained oscillations.

For oscillations to be sustained, the time taken by the electrons to travel into the repeller space and back to the gap (called transit time) must have an optimum value. This factor is not important in a klystron amplifier but it assumes a great importance here.

The most optimum departure time is obviously centered on the reference electron which is at 180° point of sine wave voltage across the resonator gap. The cavity resonator spends energy in accelerating the electrons and gains energy in retarding them. As there are as many retarded electrons as accelerated the total energy outlay is nil. From this discussion, it is clear that the best possible time for electrons to return to the gap is at a time at which the voltage then existing across the gap will apply maximum retardation to them.

This is when the gap voltage is positive maximum. This causes electrons to fall through the maximum negative voltage between the gap grids, thus giving up the maximum amount of energy to the gap. Thus it appears that the best time for electrons to return to the gap is at the 90° point of sine wave gap voltage. voltage. Returning of electrons after $1 \frac{3}{4}$ or $2 \frac{3}{4}$ or $3 \frac{3}{4}$ cycles etc. satisfies the above requirements. In In general, the optimum transit time should be

Where n is any integer.

This depends on repeller and anode voltage.

The travelling wave tube is a new type of tube which has displayed considerable promise as a broad band amplifier, proposed by Pierce and others in 1946. These amplifiers are different from klystron amplifiers in the following ways.

The interaction between the RF field and the moving electron beam will take place only when the RF Fifield is regarded by some means. Normally slow wave structures are utilized to retard the RF field, like helix or a waveguide arrangement.

The physical construction of a typical TWT along with the schematic electrode arrangement is shown in Fig. It has an electron gun as used in klystrons, which is used to produce a narrow constant velocity electron beam. This electron beam is in turn passed through the center of a long axial helix. A magnetic focusing field is provided to prevent the beam from spreading and to guide it through the center of the helix. Helix is a loosely wound thin conducting helical wire, which acts as a slow wave structure. 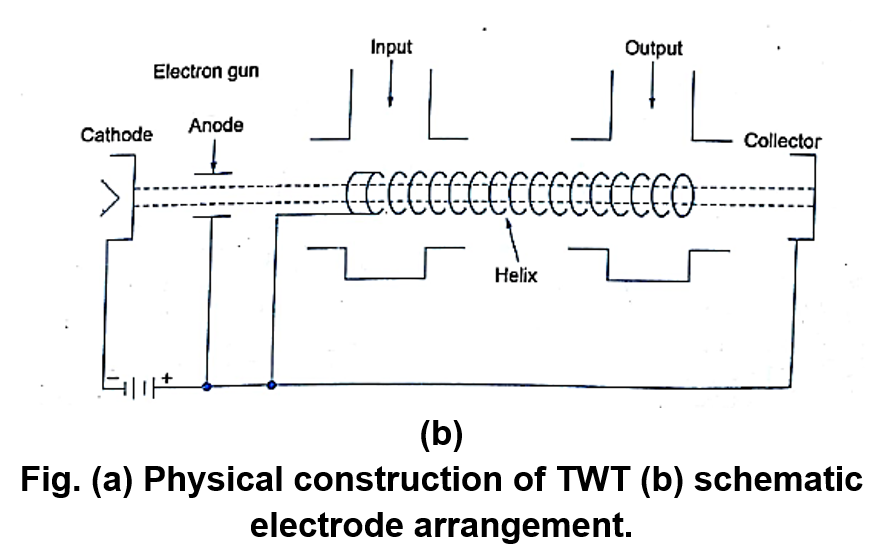 When the applied RF signal propagates around the turns of the helix, it produces an electric field at the center of the helix. The RF filed propagates with velocity of light. The axial electric field due to RF signal travels with velocity of light multicity by the ratio of helix pitch to helix circumference. When the velocity of the electron beam traveling through helix approximates the rate of advance of the axial filed, then interaction takes place between them in such a way that on an average the electron beam delivers energy to the RF wave on the helix.

Thus, the signal wave grows and amplified output is obtained at the output of the TWT. The axial phase velocity $v_P$ is given by,

where r is the radius of the helix and is essentially constant over a range of frequencies and this characteristic of helix slow wave structure enables TWT to have broadband operation. Helix, since it provides the least change in v_p with frequency, is preferred over other slow wave structures for TWT.

The TWT may be thought of as a limiting case of the multicavity klystron which has a very large number of closely spaced gaps with a phase change that propagates from left to right at approximately the same velocity as the electron beam. When the axial field is zero, electron velocity is unaffected.

The electrons get velocity modulated. As a result of energy transfer from the electron to the RF field in phase with the RF field at the axis, a second wave is induced on the helix. This produces an axial electric field that lags behind the original electric field by λ/4. Bunching continues to take place. The electrons in the bunch encounter retarding field and deliver energy to the wave on the helix. The output becomes larger than the input and amplification results. Thus, the energy increase in the RF is a continuous process.