PICONET: Bluetooth is a WPAn (Wireless Personal Area Network) open standard that provides an adhoc way of connecting devices in the 10m range.

It is a short range, low cost and power efficient radio technology that supports point-to-point and point-to-multipoint connections.

It connects handheld devices like printers, laptops, mobile phones and other accessories in the 10m radius. It operates in the ISM band. Bluetooth operates in the 2.4GHz band and uses a frequency hopping TDD method for each radio channel

The bluetooth enabled devices can locate each other, but user action is essential in order to make connections with other devices and from networks.

Upto eight devices can be connected in a Bluetooth network called, PICONET.

One of them acts as a master and remaining act as slaves. Hence, a maximum of 7 slaves can be supported inside a piconet.

When ever two or more devices detect each other and communicate through Bluetooth, a PICONET is formed 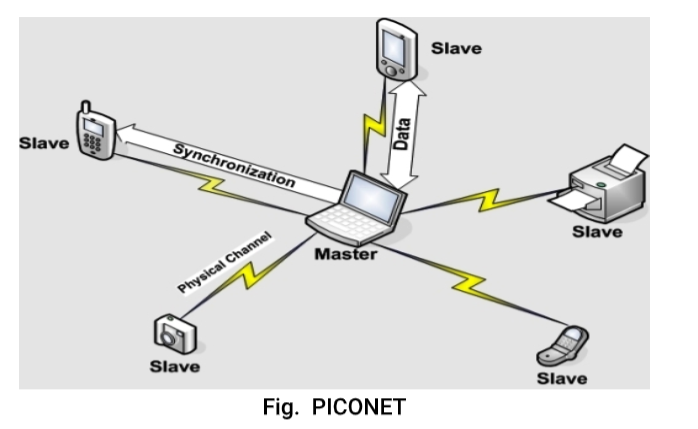 Eight devices can be considered in a Bluetooth network called Piconet. One of them acts as a master and other acts a slaves.

A scatter-net is formed when two or more piconets connect through a bridge node.

In addition to seven active slaves, there can be up to 255 parked nodes in the net that can only respond to a beacon signal from the master.

The slaves are dumb devices that do the task that the master tells them to do. 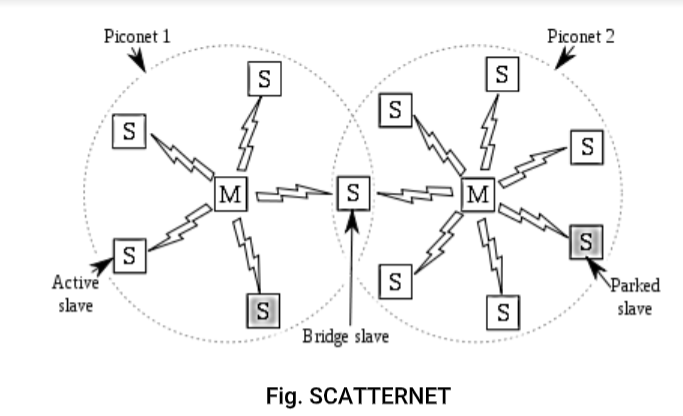 The bluetooth protocol stack defines the software layers that are used for communication on the top of the radio link.

The top layer is the application layer.

The middle layer comprises of the industry standard protocols.

The transmission characteristics are defined by the Bluetooth radio layer. It transfers the data bits from the slave to the master and vice-versa

The Bluetooth networks can support speech and data channels.

For the packet switched data na Asynchronous connection less(ACL) link is used. The data is obtained from the L2CAP layer on the transmitting side. The data is delivered to L2CAP on the receiving side.

For real time data like telephony, Synchronous Connection Oriented (SCO) link is used. Here a fixed slot in each direction is allocated to the channel. Because of the time critical nature of the SCO links, the frames are never re-transmitted and forward correction is used to provide high reliability. A slave can have upto 3 SCO channels with its master and each link can transmit one 64-kbps PCM audio channel.

A data link layer protocol that communicates with its peer in the target device is called as the Link Manager Protocol (LMP). This protocol defines the messages. Te messages are used by the software in the master for polling the client in cases where the master has no data send. Between participating devices the messages are exchanged. This is done inn order to set up and maintain the radio links.

In the payload data field of Bluetooth data packet, the LMP messages are transported

Authentication and encryption is controlled by these messages.

Authentication is done with the help of a response/ challenge protocol between the claimant and the verifier.

The logical link control and adaption protocol (L2CAP) is used by the upper-layer protocols for data transport. It can be thought of as an adapter between the upper and lower layers. It provides both connection-less and connection oriented service.

An application can obtain synchronous services by opening a voice data link.

The Service Discovery Protocol (SDP) is used to find new services as they become available and to deregister services that become unavailable. It is optimized for fast changing environment. 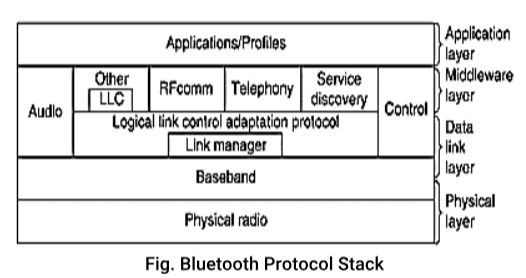 • Every packet exchanged on the channel is preceded by its access code.

• Recipients on the piconet compare incoming signals with access code. If the two do not match, the received packet is not considered valid and rest of its contents are ignored.

• The 72 bit access code is derived from master identity.

• Thus, access code is also used for synchronization and compensating for offset.

• Header part of the packet is used by the Link Control (LC) logical channel. It has the following format:

• AM_ADDR: temporary address assigned to active members of the piconet, used on all packets in both directions sent between the master and the addressed slave

• TYPE: type of packet. There are 12 types of packets for each SCO and ACL physical links, and four types of common control packets for both

• FLOW: It is used for flow control. It is asserted by slave when its buffer is full and cannot receive any more data.

• ARQN: It is used to piggy back an acknowledgement onto a frame.

Advantages of Bluetooth: Wireless: As you probably already know, there are many benefits and advantages to using wireless devices.

Bluetooth is actually inexpensive: The technology of Bluetooth is cheap for companies to implement, which results in lower costs for the company.

Bluetooth is automatic: Bluetooth doesn't have you set up a connection or push any buttons.

Standardized protocol: Bluetooth is standardized wireless, meaning that a high level of compatibility among devices is guaranteed.

Low energy consumption: As a result of Bluetooth using low power signals, the technology requires very little energy and will use less battery or electrical power as a result.

Sharing voice and data: The standard for Bluetooth will allow compatible devices to share data and voice communications. This is great for mobile phones and headsets, as Bluetooth simplifies driving and talking on your cell phone.

Instant PAN (Personal Area Network): You can connect up to seven Bluetooth devices to each other within a range of up to 30 feet, forming a piconet or PAN. For a single room, you can also set up multiple piconets.

Upgradeable: Upgradeable is the standard for Bluetooth. There are newer versions of Bluetooth in the works, which offer many new advantages and backward compatible with older versions.

The technology stays: Bluetooth technology is a worldwide, universal wireless standard. With it being as popular as it is, you can count on it being around for years to come.

• The only real downsides are the data rate and security. Infrared can have data rates of up to 4 MBps, which provides very fast rates for data transfer, while Bluetooth only offers 1 MBps.

• Although there are very few disadvantages, Bluetooth still remains the best for short range wireless technology. Those who have tried it love it, and they know for a fact that Bluetooth will be around for years to come.

Bluejacking: Bluejacking is often not a major malicious security problem, although there can be issues with it, especially as it enables someone to get their data onto another person's phone, etc.

Bluebugging: This more of an issue. This form of Bluetooth security issue allows hackers to remotely access a phone and use its features.

Car Whispering: This involves the use of software that allows hackers to send and receive audio to and from a Bluetooth enabled car stereo system.

Following are some of the capabilities that Bluetooth can provide consumers: -

• Make calls from a wireless headset connected remotely to a cell phone.

• Eliminate cables linking computers to printers, keyboards, and the mouse.

• Hook up MP3 players wirelessly to other machines to download music.