A VPN is a private connection between two machines or networks over a shared or public network. VPN technology lets an organization securely extend its network services over the Internet to remote users, branch offices, and partner companies. VPN turn the Internet into a simulated private WAN.

The Internet connection over the VPN is encrypted and secure. New authentication and encryption protocols are enforced by the remote access server. Sensitive data is hidden from the public, but it is securely accessible to appropriate users through a VPN

There are following two ways to create a VPN connection:

By connecting directly to the Internet: If you are already connected to an Internet, on a local area network, a cable modem, or a digital subscriber line (DSL), you can make a tunnel through the Internet and connects directly to the remote access server. After authentication, you can access the corporate network.

Host x wishes to send data a data packet to Host y. The data packet at Host A has the IP address of Host y. Host A transmits the data packet. When the data packet receives Router Rx, the IP Packet is removed. The Router inserts the payload field and sends it to Router Ry.

On receiving the packet Router Ry removes the IP Packets and sends it to Host y in an Ethernet frame. 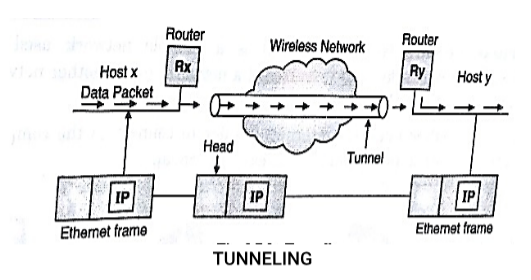 A VPN is a group of two or more computer systems that is connected to a private network that is maintained by an institution or company for its own use with public access.

VPN is already deployed in various organizations to enable remote workers to access the organization network data through the internet connectivity securely.

Today for secure data transmission the following tunnelling protocols are used as a result of developments in VPN.

This is the most commonly and widely used tunnelling protocol. It is available easily in all the windows operating systems.

It can be easily setup and does processing at high speeds.

For including the PPP data packets the PPTP uses a control channel. It is dependent on the PPP (Point to point protocol) to provide encryption and authentication, security to the data packets.

The PPTP protocol tunnels a PP session over and IP network.

It is called point-to-point protocol (PPP) and TCP/IP protocol.

L2TP is tunneling protocol. It is an improved version of PPTP protocol.

It supports LAN-LAN and user-to-LAN connectivity.

It provides data integrity and confidentiality. However it does not provide any encryption or authentication i.e. it lacks in providing security.

It is a collection of multiple related protocols like PPTP, L2TP, it is the most important protocol used in VPNs.

IPSEC is a layer 3 protocol that authenticates every IP packet.

Features of a Typical VPN:

Keep data confidential (encryption): - Data carried on the public network must be rendered unreadable to unauthorized clients on the network.

Ensure the identities of two parties communicating (authentication): The solution must verify the user's identity and restrict VPN access to authorized users only. It must also provide audit and accounting records to show who accessed what information and when.

Address Management: It must assign a client's address on the private net and ensure that private addresses are kept private.

Key Management: It must generate and refresh encryption keys for the client and the server.

Multiprotocol Support: The solution must handle common protocols used in the public network. These include IP, Internet Packet Exchange (IPX), and so on.

Low Cost: The main benefit of a VPN is the potential for significant cost savings compared to traditional leased lines or dial up networking. Security: VPNS secure the data access by hackers and unauthorized users by supporting different authentication methods and encryption methods.

Scalability: VPNS allow more number of users to be added to their network easily without modifications in the system infrastructure.

Compatibility with broadband technology: VPN provides efficient and flexible methods of accessing the network like broadband, ISDN, DSL, wireless technologies. These connections provide a cost effective method to connect to the remote offices.

The performance of a VPN will be more unpredictable and generally slower than dedicated lines due to public Net traffic Likewise, many more points of failure can affect a Net-based VPN than in a closed private system.