A constant radius arch dam is that, in which, the radii of the outside curved surface are equal at all elevations, from top to the bottom. The centres of all such circular arcs, called extrodos, will therefore, evidently lie on one vertical line. However, the introdos (i.e. inside curved surface of the arch) has gradually decreasing radius from top to the bottom, so as provide increased concrete thickness towards the base for accounting the proportionally increasing hydrostatic water pressure of the reservoir.

The dam body will, therefore, be triangular in cross-section with upstream face vertical, and a minimum thickness at the top. Evidently, it is only the radii of the introdos, which decrease with depth; while the .centres of all such circular arcs continue to lie on the same vertical line, on which lie the centres of the extrodos. Hence, in such a dam, the centres of extrodos, introdos, as well as the centre lines of the horizontal arch rings. at various elevations, lie on a straight vertical line that passes through the centre of the horizontal arch ring at the crest.

Such a dam is, therefore, sometimes called a constant centre arch dam, although strictly speaking, this centre is not at one point, but lies at 'different heights along one vertical line. Evidently, the central angles of the arch rings of the introdos will vary at different elevations, due to the varying width of the river valley (see Fig. 69); the maximum being at the top of the dam, and the minimum at the bottom of the dam.

It has further been shown that the best or most economical central angle in an arch dam is the one whose value is equal to 133°34'.

But .in a constant radius arch dam, such an angle value can be adopted only at one place, since the angle varies with height considerably, due to narrow V-shape of the valley. It is therefore considered prudent to keep the economy agle of 33° 34'-at about mid height. The angle at the top will, therefore, be more than this value; but due to topographical considerations, the angle at the top cannot be fixed greater than about 150°. Hence, the angle at the top should be such, as to give the best average angle, but restricted to about 150°. 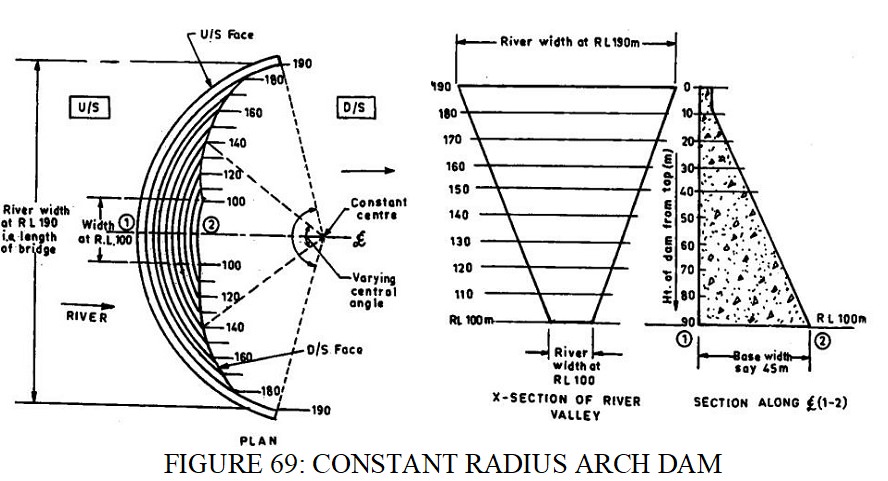 A variable radius arch dam is the one in which the radii of the extrodos curves and of introdos curves vary at variouselevations, being maximum at the top, and a certain minimum at its bottom. This makes the central angles as large as possible, so that the maximum arch efficiency may beobtained at all elevations. ·

In a typical design of such a dam, the downstream face of the dam at the central line (crown) is vertical; while at all other locations, there is a batter on both the sidesexcept at the abutments, where again, the upstream side becomes vertical. If overhangs are permitted, due to availability of stronger foundations, then the faces atthe crown as well as abutments, may be provided with overhangs, affecting saving in the designedthicknesses.

Evidently, since in- such an arch dam, the centers of the various arch rings at different elevations, do not lie on the same vertical line, it is also known as variable center arch dam. Such dams are preferred for V-shaped valleys as compared to constantradius arch dams which may be preferred for comparatively wider U-shaped valleys. 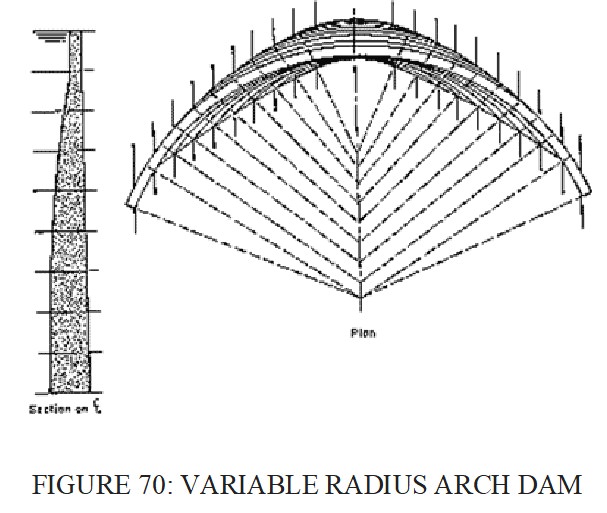 The constant.angle arch dam is a special type of variable radius arch dam, in which the central angles of the horizontal arch rings are of the same magnitude at all elevations, as shown in Fig. 27.4. The design of such adam can, thus, be made by adopting the best central angle of 133°34'; and hence sucha dam proves to be the most economical, out of the three types of ordinary arch dams,as pointed out earlier also.

However, the design of such a dam usually involves providing overhangs at abutments, which require stronger foundations, and hence such a type cannot be used if thefoundations are weak

An ordinary concrete gravity dam, as we know, is a solid body of mass concrete, somewhat triangular in section, running across the entire width of the river valley. Such a solid wall requires huge amount of concrete, which partly remains unstressed to fullextent, thereby leading to wastage of concrete.

The uplift pressure also acts on the entirewidth of the dam body, from its bottom, which further increases its size, without givingany additional benefit as a dam.Efforts have, therefore, been made from time to time, to innovate methods for affecting economy in the use of concrete, by cutting down the concrete from those damportions where it remains unstressed. Attempts have, therefore been made to providehollow gravity dams. Buttress dams, are an improvement innovation over the hollowconcrete gravity dams.

In such an innovated dam, therefore, solid walls, of specified thickness and section, are constructed parallel to the flow, at some suitable intervals. These walls are called buttresses. Inclined slabs or arch slabs are then supportedon upstream side on these buttresses. Al though, severaltypes of buttress dams have been devised, but the most common types, are: 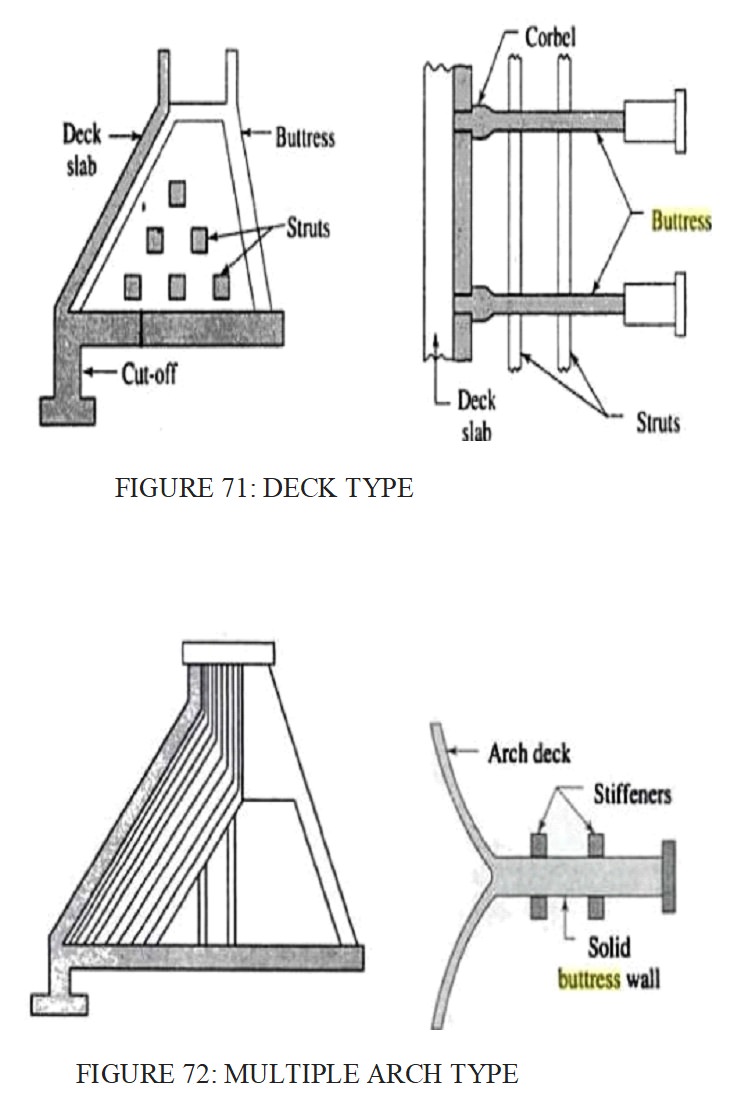