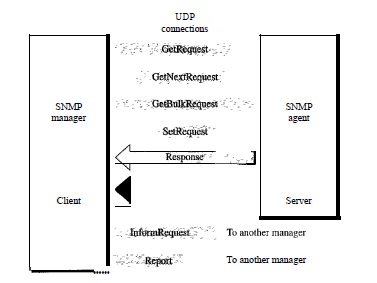 • GetRequest The GetRequest PDU is sent from the manager (client) to the agent (server) to retrieve the value of a variable or a set of variables.

• GetRequest and GetNextRequest PODs. SetRequest The SetRequest PDD is sent from the manager to the agent to set (store) a value in a variable.

• Response The Response PDD is sent from an agent to a manager in response to GetRequest or GetNextRequest. It contains the value(s) of the variable(s) requested by the manager.

• Trap The Trap (also called SNMPv2 Trap to distinguish it from SNMPv1 Trap) POD is sent from the agent to the manager to report an event. For example, if the agent is rebooted, it infonns the manager and reports the time of rebooting. InformRequest

• Format The fonnat for the eight SNMP PODs is shown in Figure The GetBulkRequest POD differs from the others in two areas, as shown in the figure. 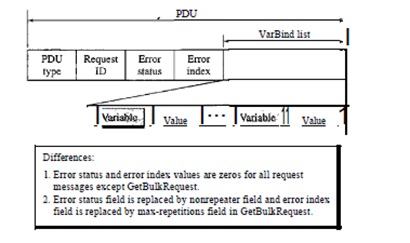 PDU type. This field defines the type of the POD

• Request ID. This field is a sequence number used by the manager in a Request POD and repeated by the agent in a response. It is used to match a request to a response.

• Error index. The error index is an offset that tells the manager which variable caused the errOr.

• Max~repetition. This field is also used only in GetBulkRequest and replaces the error index field, which is empty in Request PDUs.

• VarBind list. This is a set of variables with the corresponding values the manager wants to retrieve or set. The values are null in GetRequest and GetNextRequest. In a Trap PDU, it shows the variables and values related to a specific PDU.