• The DTMF dialing system follow the technique proposed by AT&T in the 1950s called MF (Multi-Frequency) which was deployed within the AT&T telephone network to direct calls between switching facilities using in-band signaling. 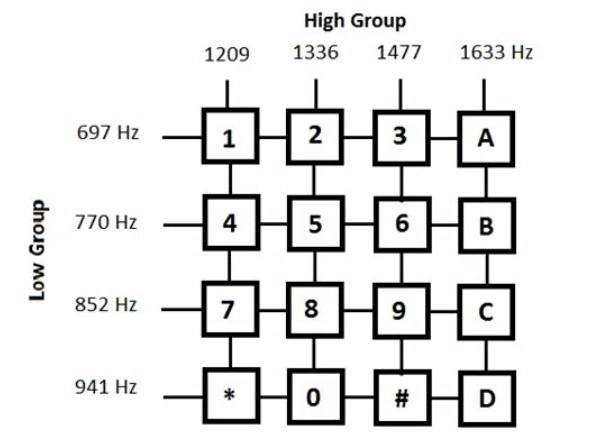 • This pair of signals represents the digit or symbol shown at the intersection of row and column in the table. For example, sending 1209Hz and 770Hz indicates that the "4" digit is being sent.

• For example, the key 1 produces a superimposition of tones of 697 and 1209 hertz (Hz). Initial pushbutton designs employed levers, so that each button activated two contacts. The tones are decoded by the switching center to determine the keys pressed by the user.

• DTMF was originally decoded by tuned filter banks. By the end of the 20th century, digital signal processing became the predominant technology for decoding. DTMF decoding algorithms often use the Goertzel algorithm to detect tones.