Generator is a machine that converts mechanical energy into electrical energy. It works based on principle of faraday law of electromagnetic induction. 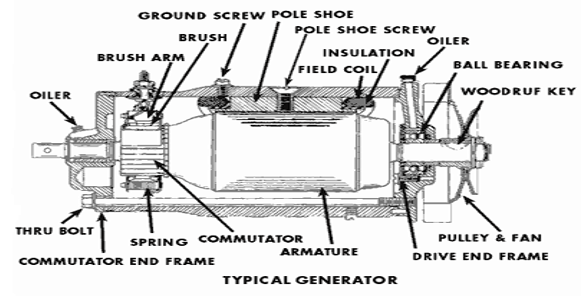 The generators are classified into types.

These are also called as alternators. It is the most important means of producing electrical power in many of the places since now days all the consumers are using AC. It works based on principle of the electromagnetic induction.

These are of two types

a. Induction generator and

The induction generator requires no separate DC excitation, regulator controls, frequency control or governor. This concept takes place when conductor coils turn in a magnetic field actuating a current and a voltage. The generators should run at a consistent speed to convey a stable AC voltage, even no load is accessible.

It can be either 3 phase or two phase generators.

1.These Generators are generally maintenance free, because of absence of brushes.

2.Easily step up and step down through transformers.

3.Transmission link size might be thinner because of step up feature

4.Size of the generator relatively smaller than DC machine

6.These Generator breakers are relatively smaller than DC breakers

DC generator is typically found in off-grid applications. These generators give a seamless power supply directly into electric storage devices and DC power grids without novel equipment. The stored power is carries to loads through dc-ac converters. The DC generators could be controlled back to an unmoving speed as batteries tend to be stimulating to recover considerably more fuel.

D.C Generators are classified according to the way their magnetic field is developed in the stater of the machine.

b. Separately-excite DC generators and

a. Permanent magnet DC generators do not require external field excitation because it has permanent magnets to produce the flux. These are used for low power applications like dynamos.

b. Separately-excite DC generators requires external field excitation to produce the magnetic flux. We can also vary the excitation to get variable output power. These are used in electroplating and electrorefining applications. Due to residual magnetism present in the poles of the stater

1.Mainly DC machines have the wide variety of operating characteristics which can be obtained by selection of the method of excitation of the field winding's.

2.The output voltage can be smoothed by regularly arranging the coils around the armature .This leads to less fluctuations which is desirable for some steady state applications.

3.No shielding need for radiation so cable cost will be less as compared to AC.