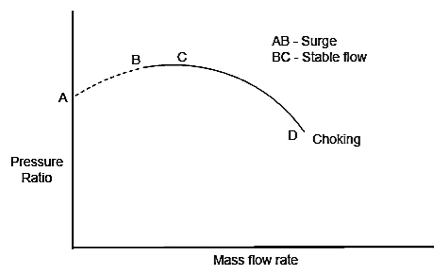 Maximum discharge pressure is obtained at minimum flow and vice versa for a particular speed. Surge is the operating point, where the Maximum head and minimum flow capacity is obtained. The principle behind working of a compressor is -Imparting Kinetic Energy to the fluid in impeller and converting this energy into Pressure energy.

This is facilitated by decreasing the diffuser speed. If the maximum head capacity is reached, then pressure in diffuser will be greater than the pressure at impeller outlet. This will prevent the fluid from moving further towards the impeller outlet and results in the flow reversal of the fluid in the diffuser.

This can be deteriorating as it can potentially damage the bearings and other rotating parts, coupled with high vibrations. This can be rectified by providing an anti-surge valve, which draws in fluid from the discharge and directs it to suction so that flow is increased and surge is controlled.

The compressor operates, somewhere between Surge point and Stonewall Point also known as Choking Point. We know that when the flow is decreased, the pressure increases. This is called surge.

Such high speeds may cause severe damage to the compressor. This can be prevented by maintaining a minimum flow resistance to the fluid flow. This is done by providing Anti-choke valves at the discharge side which restricts the flow and hence prevents choking.