Centrifugal pump works on a principle which states that if a fluid of a certain mass is given a force, it gets thrown outward radially. The main parts of the centrifugal pump include 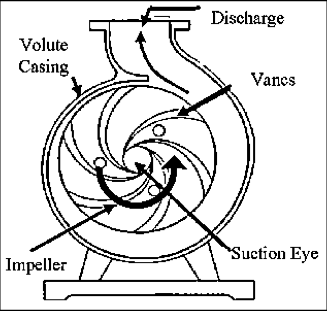 The process liquid enters the suction nozzle and then into eye (center) of a revolving device known as an impeller. When the impeller rotates, it spins the liquid sitting in the cavities between the vanes in an outward direction and provides centrifugal acceleration.

As the liquid leaves the eye of the impeller a low-pressure area is created causing more liquid to flow toward the inlet. Because the impeller blades are curved, the fluid is pushed in a tangential and radial direction by the centrifugal force. This force acting inside the pump is same as the one that keeps water inside a bucket that is rotating at the end of a string.