In case of spark ignition engine the combustible mixture of fuel and air is supplied in a desired ratio with the help of carburettor and the combustion process initiated with the help of a very high intensity spark provided by a spark plug few degrees before the end of compression stroke.

This spark burns the few molecules of mixture in the vicinity of spark gap and initiates the combustion process by transfer of heat of molecules in neighbourhood.

Once a flame is created, the advancement of this flame into the unburned mixture will depend upon the rate of heat transfer between the flame and surrounding envelope of unburned mixture, temperature and pressure.

Though the mechanism of flame propagation is unknown but the presence of flame itself is the evidence of chemical reaction between the fuel and air.

To study the combustion phenomenon of these engines the experiments were carried out by Recardo using a quartz cylinder and employing high speed photography.

The results are shown on pressure (p) and crank angle () diagram in Fig 1. In Fig.1. Curse ABMN represents the motoring curve i.e. when the engine is not firing and ABCD represents the actual combustion curse.

Point A represents the point of ignition where the spark is supplied by a spark plug.

The crank angle before T.D.C. at the instant spark is given is called angle of spark advance.

Based on the experimental results the combustion in SI engines takes place in three stages as follows:

Period of ignition lad or preparation.

The experimental results have shown that there is a certain interval of time between the instant of spark is given at point A and the instant the first tiny flame reappears at point B which corresponds to the point where there is a noticeable rise in cylinder pressure due to combustion.

This time inters al corresponds to period AB and this period is called ignition delay angle.

Ignition lag represents the period of preflame reactions in which the chain are formed as explained in the chain reaction theory of combustion.

The ignition lag depends upon the molecular structure of fuel, temperature, pressure, density, air-fuel ratio and the proportion of residual gases in the mixture.

Once the self-sustaining flame appears at point B, the flame travels outwards and burns the fuel in air.

Initially the rate of burning of fuel and flame speeds are low with small rate of pressure rise.

However as the combustion proceeds, the pressure and temperature keeps on rising with heat energy release which is transferred from burned to unburned charge, the flame propagates across the combustion chamber at high speeds. (Almost at constant speed) in the range of (15-35) m/s.

It is difficult to distinguish between these two phases of combustion i.e. The phase of ignition lag and flame propagation phase.

However, the start of second phase is considered when an appreciable pressure rise can be seen on ($p_{0}$) diagram at point B and the second phase ends when the peak pressure is attained in the cylinder i.e. at point C.

The slope of curve BC represents the rate of pressure rise. It should be noted that the rate of heat transfer to cylinder walls is low at the beginning of this phase since only the small part of the burning mixture comes in contact with the cylinder walls.

The rate of heat energy released during combustion depends on the intensity of turbulence and the air-fuel ratio.

After burning of flame termination phase.

Actually combustion is not completed at point C though it represents the completion of flame travel.

It is due to the fact the burning continues due to left over fuel and the reassociation of dissociated gases existing in the combustion chamber.

This combustion beyond point C continues during the expansion stroke and it is called as after burning representing the third stage of combustion upto point D.

The flame velocity decreases during this phase of combustion.

The effects of engine variables on ignition lag and flame propagation are being discussed below.

Effect of various parameters on combustion

The various engine variables which affect the ignition lag are as follows:

At high pressures the molecules are nearer and their rate of collisions increases. It help in forming the chain carriers and reduces the ignition lag.

The increased temperatures increases the kinetic energy of molecules which tend to increase the rate of collisions and also the mobility of reaction.

Higher compression ratio increases the pressure and temperature of the working substance.

It is observed that the ignition lag is minimum for about 10% rich mixtures as shown in Fig. 3.

The residual gases in the combustion chamber dilutes the mixture charge consequently increases the Ignition lag.

Therefore, higher the amount of residual gases in proportion to fresh charge higher will be the period of ignition lag.

The ignition lag depends on the chemical nature of the fuel. It is found that the fuels with higher self-ignition temperatures have comparatively higher period of ignition lag.

It has no effect in terms of time period but it shows in terms of crank angle turned. Therefore with higher speeds the ignition advance should be increased.

The air gap between the electrodes of a spark plug is important from the point at establishment of nucleus of flame.

If the electrode gap is too small, quenching of the flame nucleus may occur as the range of working with range of air-fuel ratio is reduced.

For a compression ratio of 7 or higher a gap of 0.625 mm. is generally found satisfactory. For Fig. 4 gives the required air-fuel ratio for stable flame as function of electrode gap and compression ratio.

It is found that the voltage required at the spark plug electrode to produce spark is found to decrease with increase in fuel-air ratio and with decrease in compression ratio the load on the engine. 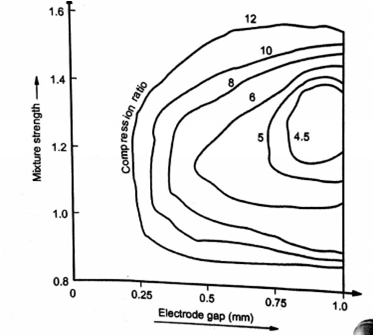