The Process of fetching the next instruction while the current instruction is being executed is called as “pipelining”. Pipelining is supported by the processor to increase the speed of program execution. Increases throughput. Several operations take place simultaneously, rather than serially in pipelining. The Pipeline has three stages fetch, decode and execute as shown in Fig.

The three stages used in the pipeline are:

(i) Fetch : In this stage the ARM processor fetches the instruction from the memory.

(ii) Decode : In this stage recognizes the instruction that is to be executed.

(iii) Execute 2 In this stage the processor processes the instruction and writes the result back to desired register.

If these three stages of execution are overlapped, we will achieve higher speed of execution. Such pipeline exists in version 7 of ARM processor. Once the pipeline is filled, each instructions require s one cycle to complete execution. Below fig shows three staged pipelined instruction. 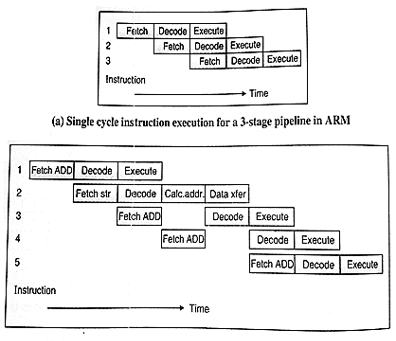 The amount of work done at each stage can be reduced by increasing the number of stages in the pipeline. To improve the performance, the processor then can be operated at higher operating frequency.

As more number of cycles are required to fill the pipeline, the system latency also increases. The data dependency between the stages can also be increased as the stages of pipeline increase. So the instructions need to be schedule while writing code to decrease data dependency.

The organization of an ARM Processor with three stage pipeline consists of the following: Register bank: This includes various registers as seen in the programmer’s model of ARM. 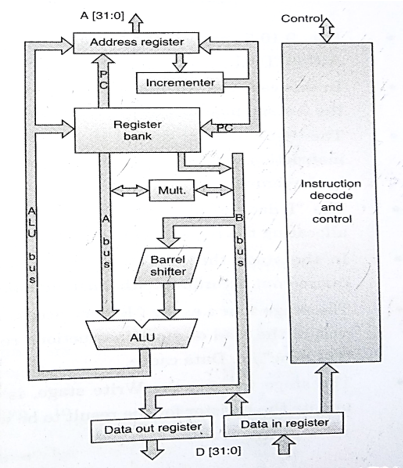 Barrel Shifter: We have also seen this barrel shifter that is used to do various operations as discussed earlier in this chapter.

The ALU: This unit performs the various arithmetic and logical operations

Address register and increment: The register stores the address and the incrementer increments the same so as to point to the next instruction. 5. Data register: It is used as a buffer to store the data when written to the memory or read from the memory.