0
What is Collision and what are different collision resolution techniques.
collision • 19k  views
0
ADD COMMENT
1 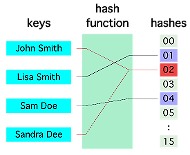 Open Addressing: In this technique a hash table with per-identified size is considered. All items are stored in the hash table itself. In addition to the data, each hash bucket also maintains the three states: EMPTY, OCCUPIED, DELETED. While inserting, if a collision occurs, alternative cells are tried until an empty bucket is found. For which one of the following technique is adopted.