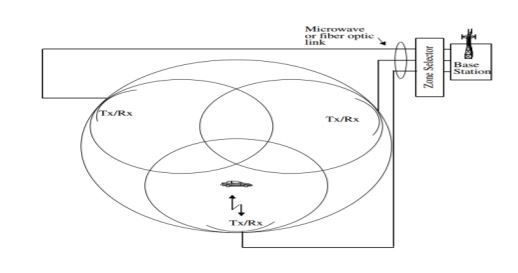  The problem associated with the sectoring is the number of handoffs. This puts additional load on the switching and control link elements of the mobile system. A solution to this problem is based on microcell concept for seven cell reuse.

 In this scheme, all the three or more zone sites represented as Tx/Rx are connected to the same base station and share the same radio equipment. The transmission media used for connecting the zones to the base station are coaxial cable, fiber optics cable or a microwave link.

 So each cell consists of a base station and multiple zones. A mobile travelling within a cell, is served by the zone that has the strongest signal of all.

 As shown in figure, the antennas in zones are placed at the outer edge of the cell and any base station channel can be assigned to any zone by the base station. As a mobile travels from one zone to the other within a cell, it uses the same channel.

 This will avoid handoff. the base station will just switch the channel to the appropriate zone site. Thus a given channel is being used only in a particular zone in which the mobile is travelling.

 So the base station radiation is localized. this will reduce interference. The channels are distributed in space and time by all zones and are reused in the co channel cells. The microcell zone concept is very useful along highways or in the busy areas.