• The various causes of congestion in a subnet are:

i. The input traffic rate exceeds the capacity of the output lines.

iii. The routers' buffer is too limited.

iv. Congestion in a subnet can occur if the processors are slow. Slow speed CPU at routers will perform the routine tasks such as queuing buffers, updating table etc slowly. 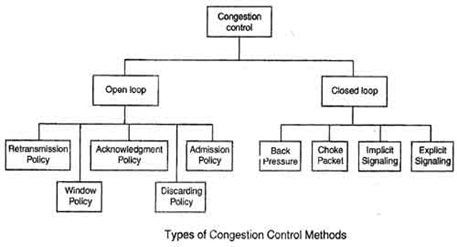 • These two categories are:

i. In this method, policies are used to prevent the congestion before it happens.

a. The sender retransmits a packet, if it feels that the packet it has sent is lost or corrupted.

b. Selective Reject method is preferred over Go-back-n window as in Go-back-n method, when timer for a packet times out, several packets are resent, although some may have arrived safely at the receiver. Thus, this duplication may make congestion worse.

a. The acknowledgement policy imposed by the receiver may also affect congestion.

b. If the receiver does not acknowledge every packet it receives it may slow down the sender and help prevent congestion.

d. To implement it, several approaches can be used:

a. A router may discard less sensitive packets when congestion is likely to happen.

b. Such a discarding policy may prevent congestion and at the same time may not harm the integrity of the transmission.

a. An admission policy, which is a quality-of-service mechanism, can also prevent congestion in virtual circuit networks.

b. Switches in a flow first check the resource requirement of a flow before admitting it to the network.

c. A router can deny establishing a virtual circuit connection if there is congestion in the "network or if there is a possibility of future congestion.

a. Backpressure is a node-to-node congestion control that starts with a node and propagates, in the opposite direction of data flow.

b. The backpressure technique can be applied only to virtual circuit networks. In such virtual circuit each node knows the upstream node from which a data flow is coming.

c. In this method of congestion control, the congested node stops receiving data from the immediate upstream node or nodes.

ii. Choke Packet a. In this method of congestion control, congested router or node sends a special type of packet called choke packet to the source to inform it about the congestion.

b. Here, congested node does not inform its upstream node about the congestion as in backpressure method.

c. In choke packet method, congested node sends a warning directly to the source station i.e. the intermediate nodes through which the packet has traveled are not warned.

a. In implicit signaling, there is no communication between the congested node or nodes and the source.

c. On sensing this congestion, the source slows down.

d. This type of congestion control policy is used by TCP.

a. In this method, the congested nodes explicitly send a signal to the source or destination to inform about the congestion.

e. In forward signaling, a bit is set in a packet moving in the direction of congestion. This bit warns the destination about the congestion. The receiver in this case uses policies such as slowing down the acknowledgements to remove the congestion.