Theory of Machines may be defined as that branch of Engineering-science, which deals with the study of relative motion between the various parts of a machine, and forces which act on them

1. Kinematics. It is that branch of Theory of Machines which deals with the relative motion between the various parts of the machines.

2. Dynamics. It is that branch of Theory of Machines which deals with the forces and their effects, while acting upon the machine parts in motion.

3. Kinetics. It is that branch of Theory of Machines which deals with the inertia forces which arise from the combined effect of the mass and motion of the machine parts.

4. Statics. It is that branch of Theory of Machines which deals with the forces and their effects while the machine parts are at rest. The mass of the parts is assumed to be negligible.

Mechanism: is a combination of rigid bodies which are formed and connected together by some means, so that they are moved to perform some functions, such as the crank- connecting rod mechanism of the I.C. engines, steering mechanisms of automobiles……. etc. The analysis of mechanisms is a part of machine design which is concerned with the kinematics and kinetics of mechanisms (or the dynamics of mechanisms).

Rigid Body: is that body whose changes in shape are negligible compared with its overall dimensions or with the changes in position of the body as a whole, such as rigid link, rigid disc…..etc.

Links: are rigid bodies each having hinged holes or slot to be connected together by some means to constitute a mechanism which able to transmit motion or forces to some another locations.

Absolute motion: the motion of body in relative to another body which is at rest or to a fixed point located on this body.

Relative motion: the motion of body in relative to another moved body.

Scalar quantities: are those quantities which have magnitude only e.g. mass, time, volume, density etc.

Vector quantities: are those quantities which have magnitude as well as direction e.g. velocity, acceleration, force etc.

The connection of mechanism parts: Hinged part: The hinge connection may be used to connect the links together or connect a link to a fixed point, piston, disc ….. etc, the connection is achieved using pin, which is pass through the hinge holes.

Sliding Parts: The sliding connection may be used to connect two links rotate about fixed points by means of slot, pin and hinge.

Translated bodies: There are some bodies in the mechanism which are constrained to move in translation manner, such as the piston of crank- connecting rod mechanism, the body is used to be in translation motion, if any line remain in some configuration during motion; then all the points have the same absolute velocity and acceleration

1. Rigid link. A rigid link is one which does not undergo any deformation while transmitting motion. Strictly speaking, rigid links do not exist. However, as the deformation of a connecting rod,crank etc. of a reciprocating steam engine is not appreciable, they can be considered as rigid links.

2. Flexible link. A flexible link is one which is partly deformed in a manner not to affect the transmission of motion. For example, belts, ropes, chains and wires are flexible links and transmit tensile forces only.

3. Fluid link. A fluid link is one which is formed by having a fluid in a receptacle and the motion is transmitted through the fluid by pressure or compression only, as in the case of hydraulic presses, jacks and brakes

1. Completely constrained motion: When the motion between a pair is limited to a definite Direction irrespective of the direction of force applied,

When the motion between a pair can take place in more than one direction, then the motion is called an incompletely constrained motion

Structure - It is an assemblage of a number of resistant bodies (known as members) having no relative motion between them.

Difference Between a Machine and a Structure:-

The two links or elements of a machine, when in contact with each other, are said to form a pair.

1. According to the type of relative motion between the elements.

2. According to the type of contact between the elements

3. According to the type of closure.

(a) Self closed pair. When the two elements of a pair are connected together mechanically in Such a way that only required kind of relative motion occurs,

b) Force - closed pair. When the two elements of a pair are not connected mechanically but Are kept in contact by the action of external forces

When the kinematic pairs are coupled in such a way that the last link is joined to the first link to transmit definite motion (i.e. completely or successfully constrained motion), it is called a kinematic chain.

If each link is assumed to form two pairs with two adjacent links, then the relation between The number of pairs (p) forming a kinematic chain and the number of links (l) may be expressed in The form of an equation:

Another relation between the number of links (l) and the number of joints ( j ) which Constitute a kinematic chain is given by the expression: $j=(\frac{3l}{2})-2$

L.H.S. > R.H.S. no relative motion is possible. Such type of chain is called locked chain.

L.H.S. = R.H.S. kinematic chain of one degree of freedom.

The Grubler’s criterion applies to mechanisms with only single degree of freedom joints Where the overall movability of the mechanism is unity. Substituting n = 1 and h = 0 in Kutzbach Equation, we have

This method of obtaining different mechanisms by fixing different links in a kinematic chain, is known as inversion of the mechanism. 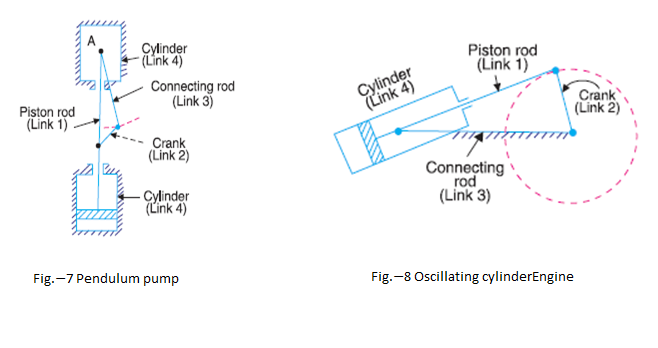 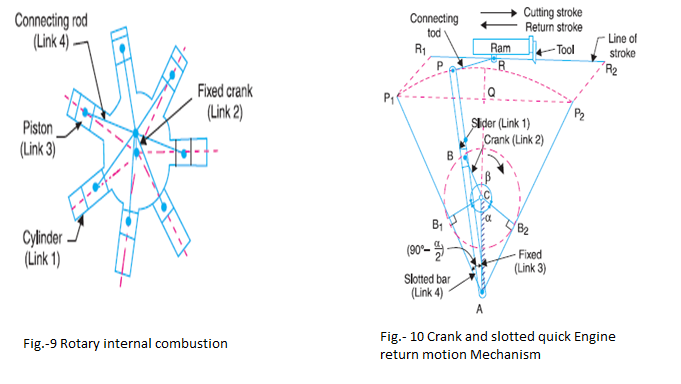 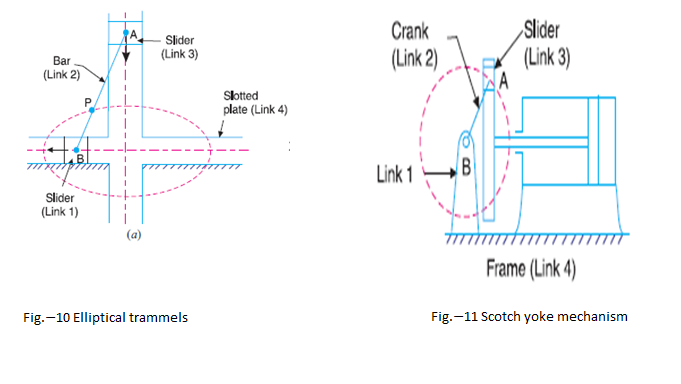