0
The Law of Gearing

THE LAW OF GEARING

The fundamental law of gearing states that the angular velocity ratio of all gears must remain constant throughout the gear mesh. This condition is satisfied when the common normal at the point of contact between the teeth passes through a fixed point on the line of centers, known as the pitch point.

Law Governing Shape of the Teeth

The figure below shows two mating gear teeth in which: Tooth profile 1 drives tooth profile 2 by acting at the instantaneous contact point K.

• NM is the common normal of the two profiles.

• M is the foot of the perpendicular from $O_2$ to NM. Although the two profiles have different velocities $v_1$ and $v_2$ at point K, their velocities along NM are equal in both magnitude and direction. Otherwise the two tooth profiles would separate from each other.

We notice that the intersection of the tangency NM and the line of center $O_1 O_2$ is point P, and $O_1N.P = O_2M.P$ Thus, the relationship between the angular velocities of the driving gear to the driven gear, or velocity ratio, of a pair of mating teeth is:

Point P is very important to the velocity ratio, and it is called the pitch point. Pitch point divides the line between the line of centers and its position decides the velocity ratio of the two teeth. The velocity ratio is equal to the inverse ratio of the diameters of pitch circles. This is the fundamental law of gear-tooth action. When the tooth profiles of gears are shaped so as to produce a constant angular-velocity ratio during meshing, the surfaces are said to be conjugate. Pressure angle defines the shape of the gear tooth and is an important criterion in gear manufacturing. Higher pressure angle results in wider base, stronger teeth and lower tendency to experience tooth tip interference, but are susceptible to noise and higher bearing loads. Low pressure angles are quieter and smoother, have lower bearing loads and lower frictional forces, but are susceptible to undercutting at low number of teeth.

Contact Ratio: In the above description, we have considered one gear tooth in contact for simplicity. In practice, more than one tooth is actually in contact during engagement and therefore the load is partially shared with another pair of teeth. This property is called the contact ratio. A contact ratio between 1 and 2 means that part of the time two pairs of teeth are in contact, and during the remaining time one pair is in contact. A ratio between 2 and 3 means 2 or 3 pairs of teeth are always in contact. The higher the contact ratio the more the load is shared between teeth. It is a good practice to maintain a contact ratio of 1.3 to 1.8. Under no circumstances should the ratio drop below 1.1.

Gear profiles should satisfy the law of gearing. The profiles best suited for this law are:

Most modern gears use a special tooth profile called an involute. This profile has the very important property of maintaining a constant speed ratio between the two gears. The involute profile is the path traced by a point on a line as the line rolls without slipping on the circumference of a circle. It may also be defined as a path traced by the end of a string which is originally wrapped on a circle when the string is unwrapped from the circle. The circle from which the involute is derived is called the base circle. 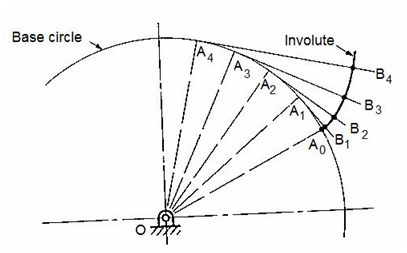 We use the word involute because the contour of gear teeth curves inward. On an involute gear tooth, the contact point starts closer to one gear, and as the gear spins, the contact point moves away from that gear and towards the other. Involute gears have the invaluable ability of providing conjugate action when the gears' centre distance is varied either deliberately or involuntarily due to manufacturing and/or mounting errors.

Cycloidal gears have a tooth shape based on the epicycloid and hypocycloid curves, which are the curves generated by a circle rolling around the outside and inside of another circle, respectively. They are not straight and their shape depends on the radius of the generating circle. Cycloidal gears are used in pairs and are set at an angle of 180 degrees to balance the load. The input and output remains in constant mesh. 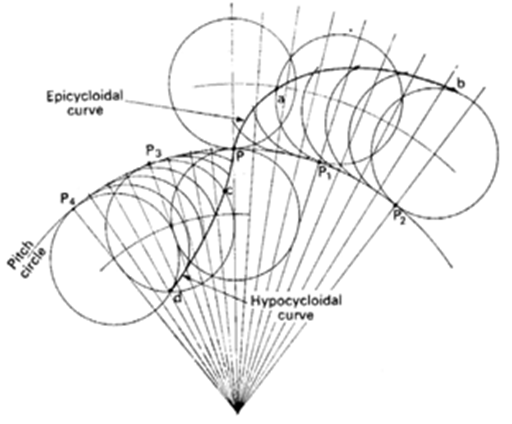 Comparison between Involute and Cycloidal Gears In actual practice, the involute tooth profile is the most commonly used because of following advantages: 1. The most important advantage of the involute gears is that the variations in center distance do not affect the angular velocity ratio. This is not true for cycloidal gears which require exact center distance to be maintained.

The following terms are used when describing the dimensions of a gear tooth:

1. Addendum: the distance from the top of a tooth to the pitch circle. Its value isequal to one module.

2. Dedendum: the distance from the pitch circle to the bottom of the tooth space(root circle). It equals the addendum + the working clearance. Dedendum is bigger than addendum and is equal to Addendum + Clearance = m + 0.157m = 1.157m

3. Whole depth: The total depth of the space between adjacent teeth and is equalto addendum plus dedendum. Also equal to working depth plus clearance.

5. Working Clearance: This is a radial distance from the tip of a tooth to the bottomof a mating tooth space when the teeth are symmetrically engaged. Its standard value is 0.157m.

7. Base Circle diameter: The diameter on which the involute teeth profile is based.

8. Addendum circle: A circle bounding the ends of the teeth in a right section of the gear.

9. Dedendum circle: The circle bounding the spaces between the teeth in a right section of the gear

10. Tooth space: It is the width of space between two teeth measured on the pitch circle.

11. Face of tooth: It is that part of the tooth surface which is above the pitch surface.

12. Flank of the tooth: It is that part of the tooth surface which is lying below the pitch surface.

13. Point of contact: Any point at which two tooth profiles touch each other.

14. Path of action: The locus of successive contact points between a pair of gear teeth, during the phase of engagement 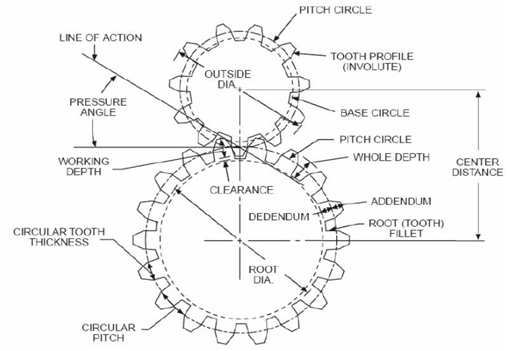 15. Line of action: The line of action is the path of action for involute gears. It is the straight line passing through the pitch point and tangent to both base circles.

Tooth thickness, (t) is the width of the tooth (arc distance) measured on the pitch circle.

• Space width, (S) or tooth space is the arc distance between two adjacent teeth measured on the pitch circle.

• Backlash, (B) is the difference between the space width and the tooth thickness. $B = S – t$ 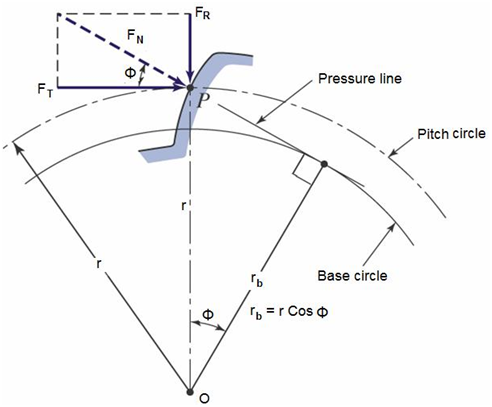 The force transmitted along the line of action results in a torque generated at the base circle. The torque can be calculated by:

From the figure above, the relationship between the base circle and pitch circle radius can be stated as: $r_b = r cosФ$ Or $T = F_N r cosФ$

• $F_N$ is the force action on the line of action

• $\phi$ is the pressure angle

This resultant force $F_N$ can be resolved into two components: tangential component $F_T$ and radial components $F_R$ at the pitch point.

$F_T$ - the tangential force component acting at the radius of the pitch circle. It determines the magnitude of the torque and consequently the power transmitted. The Tangential component is expressed as: $F_T= FNcosФ$

$F_R$ - the radial or normal force directed towards the center of the gear. $F_R$ serves to separate the shafts connected to the gears and for this reason $F_R$ is sometimes referred to as the separating force. The radial component is expressed as: $F_R= F_NsinΦ$ or $F_TtanΦ$

Torque exerted on the gear shaft in terms of the pitch circle radius can be found by substituting $F_T = F_NcosФ$ in Eq. 13. The resultant expression is:

The maximum force ($F_T$) is exerted along the common normal through the pitch point which is line perpendicular to the line of centers. After determining FT, the magnitude of the other force components and/or their directions can be readily determined.

Recall the following relationship existing between speed, torque and power: $P=Tw$ or,

The torque transmitted by the gear is given by:

(RPM) Alternatively in US

Power can also be expressed in terms of the pitch line velocity v.

The above expression can be rearranged to solve for $F_T$;