Definition of Setting Out

Main Principles of Setting Out Operations

Aims of Setting Out

2.Once setting out begins, it must proceed quickly with little or no delay in order that the works can proceed smoothly and the cost can be minimized.

Stages of Setting Out

Overall, there are three (3) stages of setting out need to be carried out in construction works:

• Location grids are used to assist the planning authorities and designers in plotting the location of boundaries, buildings, roads, underground utilities or other features.

• If the building to be set out, it is important to mark on the plan of the building site the approximate position of the structural grid or site grid.

• Site grids can be considered as the transfer of the location grid from the plan or drawing to the site by setting out.

##STAGES IN SETTING OUT

• The marking of site clearance and excavation areas.

• Methods of setting out:

a. Polar setting out method

• In practice, 1st stage setting out involves the use of many horizontal and vertical control techniques.

• The purpose of this stage is to locate the boundaries of the works in their correct position on the ground surface and to define major elements.

• In order to do this, horizontal and vertical control points must be established on or near the site.

• Up to this point, all the control points will be outside the main construction.

Example: The pegs defining building corners, center lines and so on will be knocked out during excavation works and only the original control points will be undisturbed.

PRINCIPLE OF SETTING OUT

a. The control points should be located through out the site in order all the design points can be fixed from at least two of them so that the work can be independently checked.

b. The design points must be set out to the accuracy stated in the specifications.

i. Run between two buildings.

ii. Mark the boundary with an existing building/ development.structure

iii. Mark the center line for a new road.

PRINCIPLE OF SETTING OUT

• In order the design points can be positioned at their correct levels, vertical control points of known elevation relative to some specified vertical datum are established. Some vertical control techniques:

The positions of TBMs should be fixed during the initial reconnaissance so that their construction can be completed in good time and they can be allowed to settle before levelling them in. In practice, 20mm diameter steel bolts and 100mm long, driven into existing steps, ledges, footpaths etc. are ideal.

These consist of a horizontal timber cross piece nailed to a single upright or a pair of uprights driven into the ground. The upper edge of the cross piece is set to a convenient height above the required plane of the structure, usually to the nearest 100mm, and should be a height above ground to ensure convenient alignment by eye with the upper edge.

• A traveller is similar in appearance to a sight rail on a single support and is portable. The length of the upper edge to its base should be a convenient dimension to the nearest half meter.

• Travellers are used in conjunction with sight rails. The sight rails are set some convenient value above the required plane and the travellers are constructed so that their length is equal to this value.

• As excavation works proceeds, the traveller is sighted in between the sight rails and used to monitor the cutting and filling.

• For controlling side slopes on embankments and cuttings slope rails are used.

• For an embankment the slope rails usually define a plane parallel to the slope of the embankment offset by a convenient distance.

Controls For Setting Out

▪ Horizontal control can be achieved by establishing reference grid

• The primary control points may be the triangular stations

• The secondary control are referred to these primary control stations

• Before the excavation for the proposed foundation is commenced, the site shall be cleared of vegetation, brushwood, stumps of trees, debris, etc.

• Next is to set out a baseline for the work.

• For setting out the foundations of small buildings, the center line of the longest outer wall of the building is first marked on the ground by stretching a string between wooden or mild steel pegs driven at the ends.

• For accurate work, nails can be fixed at the center of the pegs.

• Two pegs, one on either side of the central peg, are driven at each end of the line. Each peg is equidistant from the central peg, and the distance between the outer pegs corresponds to the width of foundation trench to be excavated.

• When string is stretched joining the corresponding pegs at the two extremities of the line, the boundary of the trench to be excavated can be marked on the ground with dry lime powder.

• The center lines of other walls, which are perpendicular to the long wall, are then marked by setting out right angles.

A right angle can be set out by forming a triangle with 3, 4 and 5 units long.

• These dimensions should be measured with the help of a steel tape. Alternatively, a theodolite or prismatic compass may be used for setting out right angles.

• Similarly, outer lines of the foundation trench of each cross-wall can be set out, as shown in the following figure below. 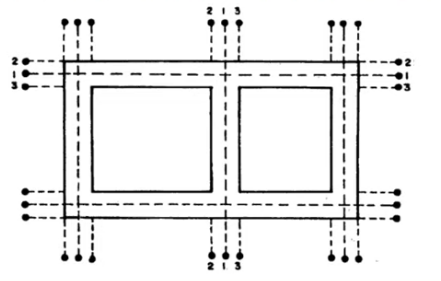