1) When a solid body is immersed in a flowing fluid, a thin layer of fluid is formed, and this thin layer is called as boundary layer, which is adjacent to the solid body.

2) In this layer formed, the velocity varies from 0 to freestream velocity in the direction normal to solid body point. Thickness of the boundary layer increases along the length of the solid body.

3) This fluid layer for formed has to work against surface friction at the expense of kinetic energy.

4) This loss of kinetic energy is recovered from the immediate fluid layer through the momentum exchange process. Thus decreasing the velocity of layer.

6) This phenomena is called as boundary layer separation.

7) The point on the body where the boundary layer is on the verge of separation from the surface is called as point of separation.

Methods of preventing the separation of boundary layer

1) Suction of slow moving fluid by a suction slot.

2) Supplying additional energy from a blower.

3) Providing a bypass in the slotted wing.

4) Providing guide blades in a bend.

5) Providing small divergence in a diffuser.

Introduction of flow around submerged bodies:

1) When a body is stationary and a fluid is flowing over it, some force is exerted by the flowing fluid on the body.

2) Similarly when a body is moving through liquid which is stationary, some force is exerted by the fluid on the body.

3) Similarly when both the fluid and the body are moving (at different velocities) even then some force is exerted by the fluid on the body.

a) Flow of air over buildings.

b) Flow of water over bridges

a) The component of total force, (which is denoted as 'FR'), in the direction of motion is called as drag.

c) Thus it can be defined as, the force exerted by the fluid in the direction of motion.

a) The component of total force '$F_T$', in the direction of perpendicular to the motions direction is known as lift.

c) When the axis of the body is inclined to the direction of fluid flow, only then lift occurs. If the axis is parallel (lift=0).

*Note:- * When the fluid is assumed ideal and the body is symmetrical i.e., sphere or cylinder, both the drag and lift are zero. 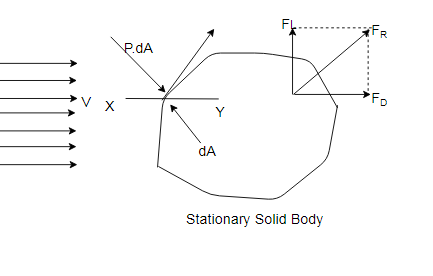 where $C_D$ is the coefficient of drag

where $C_L$ is the coefficient of lift

and A = largest projected area of immersed body.

(i) The lift force

(iv) The power required to keep the plate in motion

(iv) Power required to keep the plate in motion: -

Q2) A truck having a projected area of 6.5 square metres travelling at 70 km per hour has a total resistance of 2000N. Of this 20% is due to rolling friction and 10% is due to surface friction. The rest is due to form drag. Calculate the coefficient of drag. Take $\rho=1.25kg/m^3$ of air.

Then $C_D$ is the coefficient of form drag