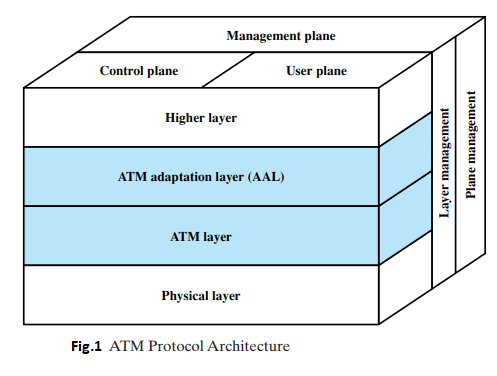 The user plane, with its layered structure, provides for user information flow transfer, along with associated controls (e.g. flow control, and recovery from errors, etc.).

This plane has a layered structure and performs the call control and connection control functions; it deals with the signalling necessary to set up, supervise and release calls and connections.

The distinction, if any, between local and global control plane functions in the broadband environment is for further study.

Functions of the individual layers of the B-ISDN PRM

The functions of each layer, the primitives exchanged between layers, and primitives exchanged between the layers and the management plane are described below. The information flows described do not imply a specific physical realisation. Figure illustrates the layers of the PRM, and identifies the functions of the Physical Layer, the ATM Layer, and the AAL 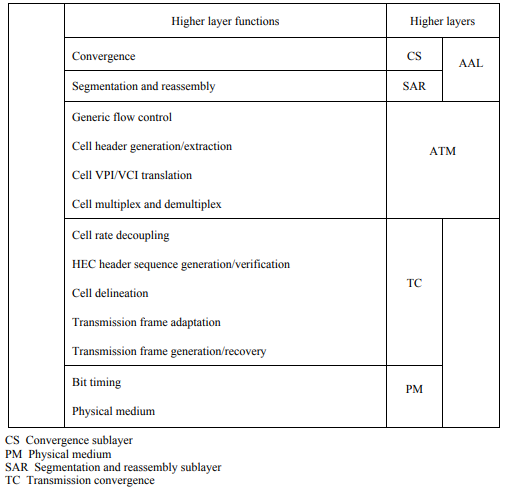 Physical layer: The lowest layer in the ATM protocol.It describes the physical transmission media.We can use shielded and shielded twisted pair,Coaxial cable and fibre optic cable.

ATM layer: It performs all function relating to the routing and multiplexing of cells over VCs.It generates a header to the segment streams generated bye the AAL,Similarly on the receipt of a cell streams it removes the header from the cell and pass the cell contents to the AAl protocol.To perform all these function, The ATM layer maintains a table which contain a list of VCIs.

ATM Adaptation Layer Top layer in the ATM protocol model.It converts the submitted information into streams of 48-octet segments and transports these in the payload field of multiple ATM cells.Similarly an receipt of the stream of cells relating to the same cell, it converts the 48-octet information field into required form for delivery to the particular higher protocol layer.