Decision tree is the most powerful and popular tool for classification and prediction. A Decision tree is a flowchart like tree structure, where each internal node denotes a test on an attribute, each branch represents an outcome of the test, and each leaf node (terminal node) holds a class label.

A decision tree is a flowchart-like structure in which each internal node represents a "test" on an attribute (e.g. whether a coin flip comes up heads or tails), each branch represents the outcome of the test, and each leaf node represents a class label (decision taken after computing all attributes). The paths from root to leaf represent classification rules.

In decision analysis, a decision tree and the closely related influence diagram are used as a visual and analytical decision support tool, where the expected values (or expected utility) of competing alternatives are calculated.

A decision tree consists of three types of nodes:

Decision trees are commonly used in operations research and operations management. If, in practice, decisions have to be taken online with no recall under incomplete knowledge, a decision tree should be paralleled by a probability model as a best choice model or online selection model algorithm. Another use of decision trees is as a descriptive means for calculating conditional probabilities.

Decision trees, influence diagrams, utility functions, and other decision analysis tools and methods are taught to undergraduate students in schools of business, health economics, and public health, and are examples of operations research or management science methods.

The decision tree can be linearized into decision rules, where the outcome is the contents of the leaf node, and the conditions along the path form a conjunction in the if clause. In general, the rules have the form:

Decision rules can be generated by constructing association rules with the target variable on the right. They can also denote temporal or causal relations.

Commonly a decision tree is drawn using flowchart symbols as it is easier for many to read and understand.

A tree can be “learned” by splitting the source set into subsets based on an attribute value test. This process is repeated on each derived subset in a recursive manner called recursive partitioning. The recursion is completed when the subset at a node all has the same value of the target variable, or when splitting no longer adds value to the predictions. The construction of decision tree classifier does not require any domain knowledge or parameter setting, and therefore is appropriate for exploratory knowledge discovery. Decision trees can handle high dimensional data. In general decision tree classifier has good accuracy. Decision tree induction is a typical inductive approach to learn knowledge on classification. 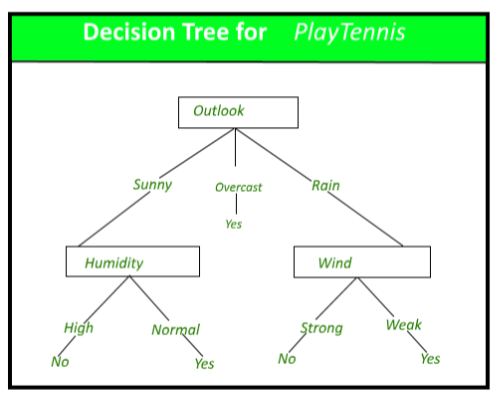 Decision trees classify instances by sorting them down the tree from the root to some leaf node, which provides the classification of the instance. An instance is classified by starting at the root node of the tree, testing the attribute specified by this node, then moving down the tree branch corresponding to the value of the attribute as shown in the above figure. This process is then repeated for the subtree rooted at the new node.

The decision tree in above figure classifies a particular morning according to whether it is suitable for playing tennis and returning the classification associated with the particular leaf. (in this case Yes or No).

would be sorted down the leftmost branch of this decision tree and would therefore be classified as a negative instance.

In other words we can say that decision tree represent a disjunction of conjunctions of constraints on the attribute values of instances. (Outlook = Sunny ^ Humidity = Normal) v (Outllok = Overcast) v (Outlook = Rain ^ Wind = Weak)

Here’s a simple example: An email management decision tree might begin with a box labeled “Receive new message.” From that, one branch leading off might lead to “Requires immediate response.” From there, a “Yes” box leads to a single decision: “Respond.” A “No” box leads to “Will take less than three minutes to answer” or “Will take more than three minutes to answer.” From the first box, a box leads to “Respond” and from the second box, a branch leads to “Mark as task and assign priority.” The branches might converge after that to “Email responded to? File or delete message.”