Thermal comfort is defined as “that condition of mind which expresses satisfaction with the thermal environment”. This condition is also some times called as “neutral condition”, though in a strict sense, they are not necessarily same. A living human body may be likened to a heat engine in which the chemical energy contained in the food it consumes is continuously converted into work and heat. The process of conversion of chemical energy contained in food into heat and work is called as “metabolism”. The rate at which the chemical energy is converted into heat and work is called as “metabolic rate”. Knowledge of metabolic rate of the occupants is required as this forms a part of the cooling load of the air conditioned building. Similar to a heat engine, one can define thermal efficiency of a human being as the ratio of useful work output to the energy input. The thermal efficiency of a human being can vary from 0% to as high as 15-20% for a short duration. By the manner in which the work is defined, for most of the light activities the useful work output of human beings is zero, indicating a thermal efficiency of 0%. Irrespective of the work output, a human body continuously generates heat at a rate varying from about 100 W (e.g. for a sedentary person) to as high as 2000 W (e.g. a person doing strenuous exercise). Continuous heat generation is essential, as the temperature of the human body has to be maintained within a narrow range of temperature, irrespective of the external surroundings.

A human body is very sensitive to temperature. The body temperature must be maintained within a narrow range to avoid discomfort, and within a somewhat wider range, to avoid danger from heat or cold stress. Studies show that at neutral condition, the temperatures should be: 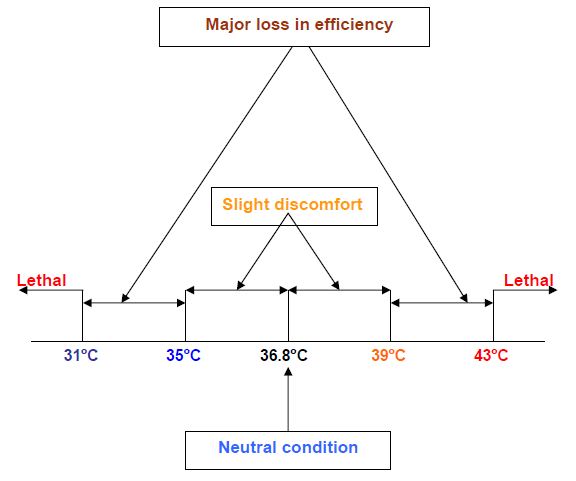 When the environment is colder than the neutral zone, then body loses more heat than is generated. Then the regulatory processes occur in the following order.

When the environment is hotter than the neutral zone, then body loses less heat than is generated. Then the regulatory processes occur in the following order.

Thus it is seen that even though human body possesses a regulatory mechanism, beyond certain conditions it becomes ineffective. Hence it is essential to ensure that surrounding conditions are conducive for comfortable and safe living. The purpose of a comfort air conditioning system is to provide suitable conditions in the occupied space so that it is thermally comfortable to the occupants.

A sedentary person at neutral condition loses about 40 % of heat by evaporation, about 30 % by convection and 30 % by radiation. However, this proportion may change with other factors. For example, the heat loss by evaporation increases when the DBT of the environment increases and/or the activity level increases.

Thermal comfort is affected by several factors. These are:

Apart from the above, other factors such as drafts, asymmetrical cooling or heating, cold or hot floors etc. also affect the thermal comfort. The objective of a comfort air conditioning system is to control the environmental factors so that comfort conditions prevail in the occupied space. It has no control on the physiological and insulating factors. However, wearing suitable clothing may help in reducing the cost of the air conditioning system.